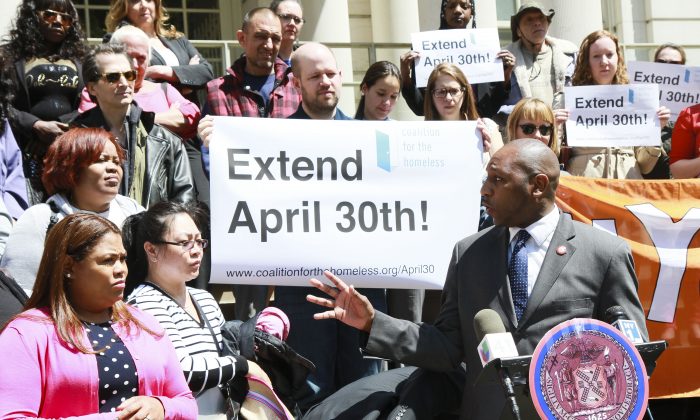 NEW YORK—A civil court judge in New York City has set a May 13 hearing date for a case that will determine whether close to 200 households made homeless by Hurricane Sandy will continue to stay in hotels with city assistance.

Judge Margaret Chan ruled Wednesday that she will hear oral arguments in two weeks from the city and those representing homeless Hurricane Sandy victims.

Earlier in the week, Judge Chan ordered the city to continue paying for 488 households still in about 40 hotels in different boroughs. One hundred ninety-six of those households were due to be cut off from the program on April 30, but a last minute lawsuit filed by Legal Aid and Weil, Gotshal and Manges LLP got them an extension until May 15.

“The city, when it decided to shelter the households, promised to shelter them until their old residences [were repaired] or the city found permanent housing,” said Konrad Cailteux, the lead attorney on the case from Weil, Gotshal & Manges LLP. “The city, by ending the hotel payments without any type of proceeding, violated our clients’ constitutional rights.”

Cailteux’s law firm and Legal Aid hope to get the case to trial and get explanations about why households in the city hotel program were threatened with a cut off date before they’d found new homes.

On Wednesday night, the city attorney’s office issued a statement on the decision.

“The City has provided more than half a year of comprehensive housing and social assistance to people impacted by the storm,” stated Thomas Crane, a city attorney. “However this program, just like FEMA’s, was never intended to be a permanent solution.”