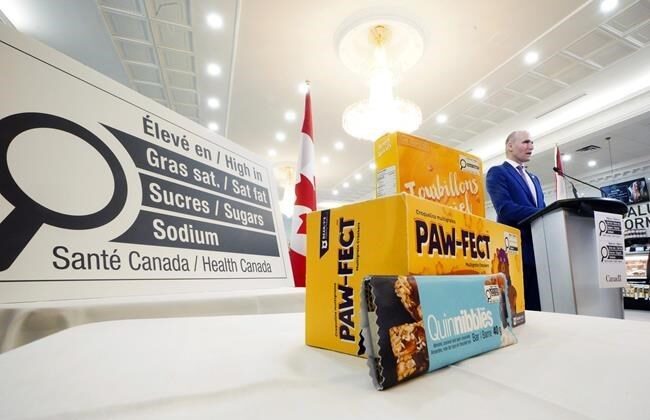 Minister of Health Jean-Yves Duclos announces new food labelling in Ottawa on June 30, 2022. Canada will require that companies add nutrition warnings to the front of pre-packaged food with high levels of saturated fat, sugar or sodium, starting in 2026. (The Canadian Press/Sean Kilpatrick)
Canada

Canadians will see warning labels for foods high in saturated fat, sodium, or sugar, but none on ground meats, the federal health minister announced today.

They’ll be placed on pre-packaged foods that contain more than 15 per cent of the suggested daily value of saturated fat, sugars, or sodium. For pre-packaged meals, the warnings will only go on items with more than 30 percent of the recommended daily intake.

The government said the labels are meant to help Canadians eat healthier, as the so-called “nutrients of public health concern” have been linked to conditions such as cardiovascular disease and Type 2 diabetes.

“Research shows that a simple, clear, symbol on the front of food packages will help consumers choose foods lower in saturated fats, sugars, and/or sodium. This type of nutrition labelling has also been used in other parts of the world with great success,” Duclos said at an Ottawa grocery store.

“[T]here were some proposals to distinguish between the two but at the end for clarity and avoiding all sorts of confusion and to treat the two types of meat equally we end up with this result, which… both the farmers and the consumers will appreciate,” he said.

The proposed labels were at the centre of controversy earlier this month. Ranchers and some provincial governments voiced opposition to putting warning labels on ground pork and beef.

Other countries with similar policies had not placed warnings on ground meats. Health Canada had already decided to exempt milk, many cheeses, and fruit. Packages of sugar and salt will also be exempt, as the government said including labels on such products would be redundant.

Francis Drouin, parliamentary secretary to the minister of agriculture and agri-food, credited the agriculture industry for its resilience during the pandemic and explained the rationale for the foods that would be excluded.

“These exemptions were made for technical, practical, and health-related reasons,” said Drouin, accompanying Duclos at the press conference.

“Single-ingredient ground meats are also being exempted, recognizing that they are as nutritious as whole cuts. This approach will ensure that consumers can make informed choices.”

“Canadian families rely on ground beef as a nutritious and affordable food staple and an important contributor to food security. We are pleased with Health Canada’s decision to omit ground beef from requiring a misleading warning label,” Schellenberg said in a written statement.

The rules are slated to come into force in 2026, which the government said gives companies time to manage the costs of adjusting their packaging.

The Canadian Cattlemen’s Association launched Dontlabelmybeef.ca to rally Canadians against the proposal. This morning the CCA emailed supporters to notify them of the results.

“Because of your ongoing support and action, the Government of Canada reversed its decision to put a warning label on ground beef, an important, nutritious staple in households across the country,” said the CCA in an email.

“Thank you for stepping up to ensure Canadians continue to have access to affordable, accessible, and whole, nutritious foods, like ground beef.”

The CCA welcomed its supporters to celebrate by snapping a photo of themselves eating a burger on Canada Day and tagging CCA in a social media post with an #Ilovecanadianbeef hashtag.