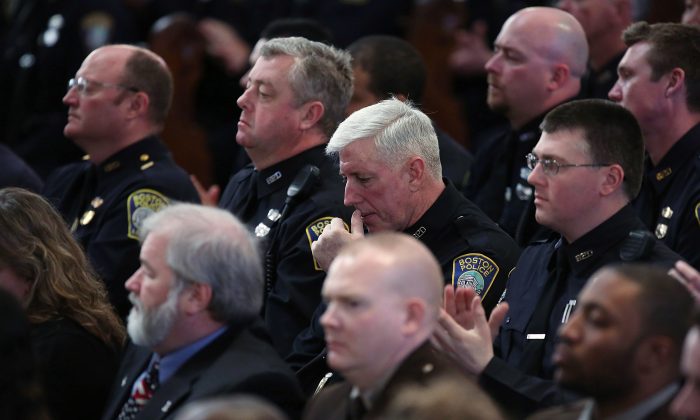 Boston police officers and EMTs listen as Barack Obama speaks at an interfaith prayer service for victims of the Boston Marathon attack titled 'Healing Our City,' at the Cathedral of the Holy Cross on April 18, in Boston, Mass. (Photo by Spencer Platt/Getty Images)
Boston Marathon

BOSTON—Immediately upon entering the pew, George May IV kneels, clasps his hands, and bows his head. May has been a Boston emergency medical technician (EMT) for seven years. He was one of the first responders called to the scene when two bombs exploded at the Boston Marathon finish line, on April 15.

Compared to the crowded mayhem of Washington Street outside, the sanctuary of the Cathedral of the Holy Cross is calm and quiet, all except for the rustle of people settling into their places. The choir sings softly.

The service, “Healing our City,” was organized by the office of Massachusetts Governor Deval Patrick. President Obama and Boston Mayor Thomas M. Menino, as well as many community faith leaders spoke at the event.

“No one is ever prepared for this type of thing to happen,” May says looking straight ahead, his eyes searching the room, his voice strained. “I have never seen anything like what I saw Monday.”

Jim Hooley is the Chief of Boston EMT, he presides with a paternal jocularity over his crew of 15 or so EMT’s present at the healing service. He welcomes them and he wants them to understand just how valuable their presence is.

In 35 years of service, Hooley has never seen so many, so seriously wounded, as he did on Monday.  “The doctors have done a terrific job,” Hooley says. “Given the magnitude of the wounds that we saw leaving, it is amazing how many people are still alive.”

The injuries caused by the home made pressure cooker explosives were sever. Wounds were filled with shrapnel. One of the bystanders injured at the scene, Elizabeth Birmingham, sits with her mother a few rows up. Bruises and cuts are still fresh on her bare shoulders and arms.

She crouches over, covering her ears when the organ music swells because she is recovering from a blown eardrum caused by the blasts.

Boston EMTs are no strangers to tragedy. “We have had accidents with a lot of injuries. We have had transportation accidents and industrial accidents with horrific injuries, and some terrible violence that we have responded to,” Hooley says. But Monday was different.

It was different because of the sheer number of those injured; 3 were killed and over 170 were severely injured.

It was different because it was an act of intentional violence.

Sean O’Connor, an EMT for 10 years, was a part of a team providing triage and treatment to the injured at the scene.

“Most of the other incidents you go to you have an understanding that you are in a safe zone,” O’Connor says.  “Your triage and treatment is in an area that is safe.  This incident, we didn’t know. They were still searching the area for other devices.”

In times of tragedy like this, many of the wounds are not physical.

Father Hamilton is a chaplain for Massachusetts State Police and the Bureau of Alcohol, Tobacco, Firearms, and Explosives, known as the ATF.

His job is to help first responders, police, and EMTs cope with violent and tragic things they see every day on the job.

“To keep these guys on the job is the most important thing.  You want to keep these trained individuals on the job, doing the work without hurting themselves,” Hamilton says.

When emergency personnel are in the field responding there is work to be done. There is no time to process what they are seeing.

James Anderson Jr., who joined the Boston EMTs just two years ago, arrived on the scene with the second round of reinforcements.  “It was just a disaster. It was mind draining. It’s disturbing for everyone,” he says.

May agrees: “When you’re doing it the training kicks in. You have to put all your emotions, your feelings in a box. Then after that, after the events are over, you start to process it,” he says.

It’s to help the healing process that thousands of service personnel, runners, doctors, and community leaders have gathered in the cathedral. The sun sifts down through the arching stained glass windows; golden angels look down from pillars lining the hall.

Hooley knows nothing could have truly prepared his crew for what they saw on Monday, but he did see all the training and the testing of systems set up for just these kinds of events pay off.  “We drill, we prepare—and our folks—it was like muscle memory. I am very proud,” he says.

It’s unclear if May, Anderson, and O’Connor really know the value of the risk they take daily. They speak with humility and calm assurance. They are proud of how well their teams worked together, of the public’s quick and brave actions, and of their resilient city.

“The Boston Marathon is one of our cities premier events for the year,” May says.  “We have a lot of people who come to enjoy the city, and they will still enjoy the city.”

Speaking softly in a small crowd after the service concludes, Hooley looks up, a smile flits across his face, and his eyes brighten.  “I feel better,” he says.