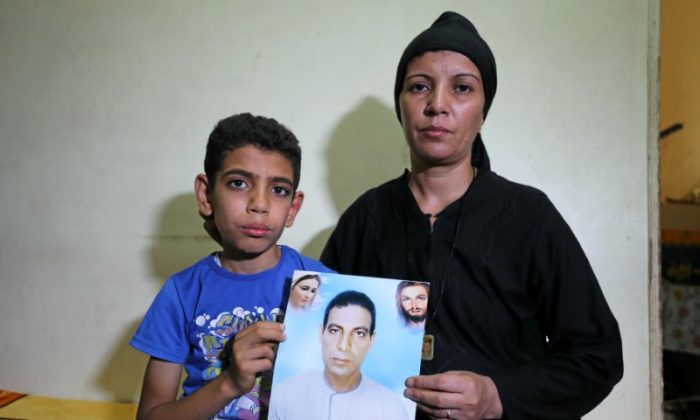 Hanaa Youssef and Mina Habib, the widow and son of a man who was killed in a militant attack against Coptic Christians last month, hold the victim's portrait in Minya, Egypt June 8, 2017. (Reuters/Mohamed Abd El Ghany)
International

‘He Said He Was Christian, They Shot Him,’ Says Son Who Saw Father Die

In an attack claimed by the ISIS terrorist group, gunmen ambushed a group of Coptic Christians traveling to a monastery in Minya in southern Egypt last month, killing 29 and wounding 24, with Mina’s father Adel among the dead.

A month later, residents of Dayr Jarnous, a Christian village that was home to seven of those killed, say the government is not providing proper security and has done nothing to help the victims’ families.

Mina is receiving therapy at a local church, in the absence of any treatment from the government. His brother Marco, 14, who also escaped the attack, visits a monastery to read the bible as a form of therapy.

Still shaken, village residents fear they are exposed if there is another attack and want President Abdel Fattah al-Sisi to keep his promise to protect Christians. There was no extra security in the village, with only a police point out in the desert where the attack took place.

In one of the first detailed eyewitness accounts of the Minya attack, which has led to retaliatory Egyptian air strikes in Libya, Mina told Reuters it was pure chance that he and Marco were spared.

They were on a pickup truck headed to the monastery of Saint Samuel the Confessor when the militants stopped them.

Ahead, blood-soaked bodies littered the desert road to the monastery and two vehicles had clearly been attacked.

“They asked my father for identification then told him to recite the Muslim profession of faith. He refused, said he was Christian. They shot him and everyone else with us in the car.”

Mina said there were around 15 gunmen. He does not know why he and Marco were spared when other children were shot.

“They saw us in the back of the truck. They made us get down and a man wearing camouflage like the army pointed his gun at us, but another one in all black told him to let us go. Every time they shot someone they would yell God is great.”

Marco added: “They had Egyptian accents like us and they were all masked except for two of them … They looked like us and did not have beards.”

Three vehicles were attacked. A bus and a car taking children and families to the monastery were the first targets.

The gunmen shot out the windows then killed all the men and fired at the feet of the women and children. They took the women’s gold jewelry, eyewitnesses said. Some children were killed.

When one of the gunmen’s vehicles had a flat tire, they stopped Adel Habib’s truck, which was carrying Christian workers, shot them and took the truck.

Marco stopped a car when the militants left and put Mina in it to get him to safety. When at last he got mobile phone reception on the desert road, Marco called their mother.

“I first thought it was someone trying to take the truck, I never thought it would be terrorism,” said Hanaa Youssef. “My husband has been going to the monastery for 25 years and nothing like this had ever happened.”

Now she keeps her children at home – neighbors have written “Marco and Mina the lion-hearted” on its walls – only letting the boys out for therapy in church. Marco was unavailable for interview; he was at a monastery reading the bible.

“Ever since the accident I am always at home,” said Mina.

“Security, the government, and the army are negligent. No one protects us other than God. It is known that Christians are not protected in this country,” said Kirolos Ishak, a university student whose father was also killed that day.

Coptic Christians, who make up 10 percent of Egypt’s population of 92 million, say they have been persecuted for years. In recent months attacks have increased, leaving about 100 dead.

Egypt’s Copts support Sisi, who has vowed to crush Islamist militants and protect Christians. He declared a three-month state of emergency after church bombings in April.

But many Christians feel the state is failing to protect them.

“Our Muslim neighbors say ‘you chose Sisi’ but ever since he came to power we are the ones who have suffered, not them,” said Youssef, the boys’ mother. “Churches and people have been attacked, people have been kidnapped, we are suffering.”

(For a graphic on Egypt attack location, click http://tmsnrt.rs/2r5sr2A)