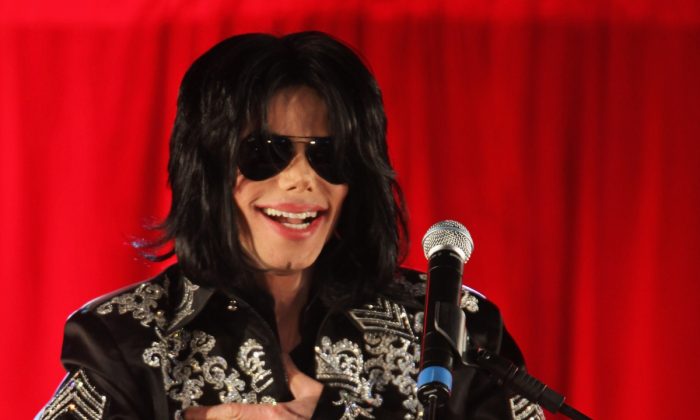 Michael Jackson announces plans for Summer residency at the O2 Arena at a press conference held at the O2 Arena on March 5, 2009, in London. (Whitby/Getty Images)
Film & TV

The Michael Jackson estate, Optimum Productions, is suing HBO after the television network released a trailer for “Leaving Neverland,” claiming that HBO has breached a nondisparagement contract by producing a Jackson related documentary without consulting Optimum Productions, according to court documents obtained by the Hollywood Reporter. Additionally, the Jackson estate complained that the documentary falsely claims Michael Jackson was abusing children.

Directed by Dan Reed of @amospictures1, #LeavingNeverland premieres 3/3 and 3/4 at 8PM on HBO. pic.twitter.com/VaWJw36wFJ

Though there is no law that protects the deceased from defamation in the United States, HBO promised that it would “not make any disparaging remarks concerning performer or any of his representatives, agents, or business practices or do any act that may harm or disparage or cause to lower in esteem the reputation or public image of performer,” which the Jackson estate claims is a promise HBO violated. According to the court documents, the director of the documentary “violated every rule of responsible journalism and documentary filmmaking.”

“Leaving Neverland” is about the experiences of James Safechuck and Wade Robson, who were both befriended by Michael Jackson when they were boys, according to HBO. In their interviews, Safechuck and Robson, who are now 40 and 36, describe their sustained abuse.

The documentary was produced and directed by Dan Reed, known for “Three Days of Terror” (2016), “The Paedophile Hunter” (2014), and other films. Reed told the Hollywood Reporter, “I didn’t characterize Michael Jackson at all in the film—I think if you watch it you’ll have noticed that it’s a story about these two families and Jackson is an element of that story. … The film itself is an account of sexual abuse.”

However, the Jackson estate claims that Reed did not devote even one minute of the documentary to evidence showing that Robson and Safechuck lied under oath during the trials. “Reed even ignored the fact that these men are still pursuing claims against the Jackson estate for hundreds of millions of dollars so they have hundreds of millions of reasons to lie,” states the court documents.

HBO programming president Casey Bloys tells @THR that he has no plans to meet with Michael Jackson Estate over controversial doc #LeavingNeverland: “No plans to not air it” https://t.co/XStHt6J7Ur pic.twitter.com/tJE2rVZ3O1

The Jackson estate will seek “all damages proximately caused by HBO’s reprehensible disparagement of Michael Jackson, which could exceed $100 million should HBO succeed in the damage it is intending to cause to the legacy of Michael Jackson.

HBO released a statement after the Jackson estate sued, announcing that it will continue to broadcast the two-part documentary on March 3 and March 4, stated Hollywood Reporter. “This will allow everyone the opportunity to assess the film and the claims in it for themselves,” HBO told Hollywood Reporter.