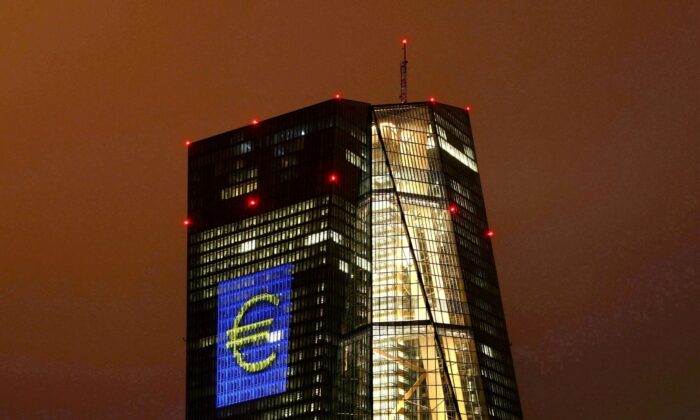 The headquarters of the European Central Bank (ECB) in Frankfurt, Germany, on March 12, 2016. (Kai Pfaffenbach/Reuters)
Economy

LONDON—-Germany’s 10-year bond yield lurched closer to positive territory on Thursday, just as borrowing costs across the euro area hit new highs in the face of a hawkish tone from the U.S. Federal Reserve and fresh signs of high German inflation.

Italy’s 10-year bond yield was 4 basis points higher on the day at 1.28 percent, having jumped to its highest level since July 2020 at almost 1.32 percent.

Most other 10-year euro area bond yields were up 3–4 bps on the day and at or near multi-month highs, reflecting a broader sell-off in bond markets led by U.S. Treasuries.

In Germany, the yield on 10-year Bunds, which rolled over into a new benchmark, rose to -0.031 percent, its highest level since May 2019, according to Refinitiv data.

Analysts said that while the rollover into a new contract made the move in Bund yields appear large, even if measured on a continuous basis, yields were at new multi-month highs.

Trading under the new benchmark puts Bund yields within striking distance of 0 percent—a level it last traded above in May 2019.

“First and foremost, it shows the magnitude of the Fed’s change of tone as they contemplate a more aggressive balance sheet reduction in parallel to hikes.”

Fed funds futures imply an almost 80 percent chance of a rate rise to 0.25 percent at the March Fed meeting.

A ratcheting up of U.S. rate hike expectations spilled over into European markets.

Money market futures dated to the European Central Bank’s October meeting, showed a 10 bps rate hike was almost fully priced in. They also price in 15 bps worth of tightening by December, versus around 13 bps on Wednesday.

Germany’s 10-year inflation-linked bond yield rose to two-month highs and was last up 10 bps on the day at -1.79 percent.

“There is still a sense that (euro area) inflation could surprise to the upside for longer than expected, so markets have to position for the view that the ECB could capitulate and move earlier on rates,” said Mizuho rates strategist Peter McCallum.

“We think inflation will peak but that could come later in Q1.”