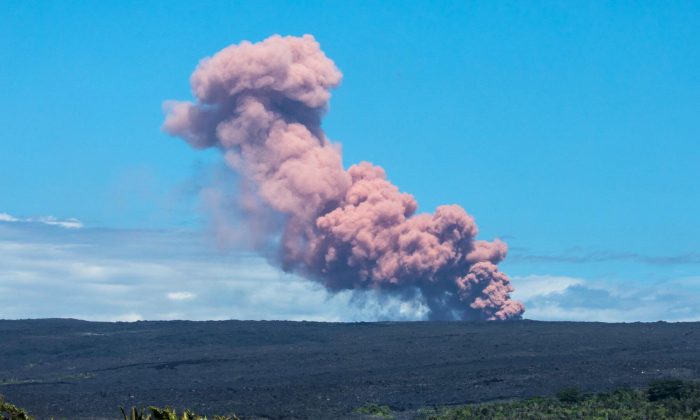 An ash cloud rises above Kilauea Volcano after it erupted, on Hawaii's Big Island May 3, 2018, in this photo obtained from social media. (Janice Wei/via Reuters)
US News

The Kilauea Volcano on Hawaii’s Big Island came to life on Thursday, belching ash into the sky and spewing fountains of lava in a residential area where people were ordered to leave their homes, officials said.

The eruption occurred after a series of earthquakes on the island over the last couple of days, including a 5.0 tremor at about 10:30 a.m., the U.S. Geological Survey reported on its website.

Residents in the Puna community, home to about 10,000 people, were ordered to evacuate after public works officials reported steam and lava emissions from a crack, according to media and the County’s Civil Defense Agency.

Governor David Ige said on Twitter that he activated the Hawaii National Guard to provide help in the county’s emergency response.

“Please be alert and prepare now to keep your family safe,” he said on Twitter to residents living near the volcano.

A plume of red ash rose from the volcano’s Pu’u ‘O’o vent high into the sky over the island, according to photos on social media.

The Kilauea Volcano has been erupting nearly continuously for more than three decades. Lava flows from the volcano, one of five on the island, have buried 48 square miles, according to the U.S. Geological Survey.

The leading edge of the lava can reach temperatures of about 2,100 Fahrenheit.