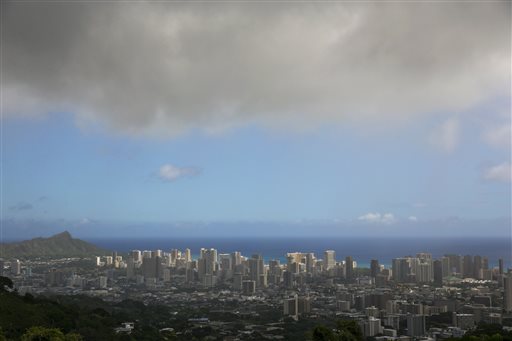 Clouds hang over Honolulu, seen from the top of Tanalus Drive on Thursday, Aug. 7, 2014. (AP Photo/Marco Garcia)
US

Hawaii News Now, the popular breaking news website in Hawaii, is reporting that Hurricane Iselle has made landfall.

The storm weakened just before it made landfall, and was downgraded to a tropical storm.

About 3,000 households were without power in Maui, although power was restored to many overnight.

In addition, some roads are closed in Maui because of fallen trees and debris, including Piiholo Road at Makawao Avenue and Olinda Road at Hanamu Road.

Large branches are blocking parts of Honoapiilani Highway at Front Street and at Hokiokio Road.

HONOLULU—The first storm in a one-two punch heading for Hawaii clamored ashore overnight Friday as a weakened tropical storm, while a second system close behind it strengthened and was on track to pass north of the islands.

Tropical Storm Iselle’s eye crossed onto the Big Island about 5 miles east of Pahala with winds at 60 mph at 2:30 a.m. Hawaii Standard Time. Iselle is the first tropical storm to hit the state in 22 years. Hurricane Julio, a Category 3 storm, is some 900 miles behind in the Pacific, packing maximum sustained winds of about 120 mph, but was forecast to weaken and skirt north of all the Hawaiian islands starting sometime Sunday morning.

No deaths or major injuries were reported from Iselle. So far the extent of damage across the Big Island, one of the least populated in the state, has been limited to downed trees and some roof damage, Hawaii County Civil Defense spokesman John Drummond said.

About 21,000 homes remained without power, he said.

The storm is expected to inundate Hawaii with 5 to 8 inches of rain, and up to a foot in some spots.

Drummond said the main part of the storm came ashore in a rural and sparsely populated region and didn’t sweep across the entire island.

“We’re waiting for the storm to move out of the area,” he said. “We’re still getting wind from the outer portions.”

Crowds line up inside the departures terminal at the Honolulu International Airport in Honolulu on Thursday, Aug. 7, 2014. (AP Photo/Marco Garcia)

Hawaii Gov. Neil Abercrombie, center, speaks at the National Weather Service office on the campus of the University of Hawaii, Thursday, Aug. 7, 2014, in Honolulu. Hawaii was bracing for both Hurricane Iselle and Julio which are on course to hit the Hawaiian Islands. (AP Photo/Marco Garcia)

Heavy rains and wind from the storm’s outer bands were also hitting Maui and Oahu on Friday as Iselle moved to the west but south of the other islands.

“We are getting some strong gusts,” Maui resident Amanda Schaefer said, adding that pelting rain on her windows kept her up Thursday night.

Friday was off to a soggy start in Honolulu, about 180 miles from the storm, where light rain fell amid gusting winds. A jogger made his way along Ala Moana Boulevard and a man carrying an umbrella walked a small dog.

The Big Island remained under a flash flood warning, with the southern region getting 4 inches of rain per hour.

“From the sense we’re getting from the weather service, I don’t think it’s going to get much worse than this,” Drummond said.

Iselle was downgraded to a tropical storm about 50 miles from shore at 11 p.m. HST Thursday, and within hours its winds had slowed to 60 mph, well below the 74 mph threshold for a hurricane.

“As wind blows into the terrain, the terrain kind of redirects the wind,” said meteorologist Chris Brenchley of the National Weather Service in Honolulu.

“I can’t say I’m too worried,” said Andrew Fujimura, 29, of Puna. “Worst-case scenario, the power may go out a day or two. But we’re prepared for that kind of stuff out here.”

Hundreds of people flowed into emergency shelters set up at high schools on the Big Island, one of which lost power for a time.

On Maui, power to a water treatment plant went out, prompting county officials to ask Kula residents in the middle of the island to conserve water.

People prepared for the storm by boarding up their windows and making last-minute trips to stock up on water and food.

Hawaii has been directly hit by hurricanes only three times since 1950. The last time Hawaii was in 1992, when Hurricane Iniki killed six people and destroyed more than 1,400 homes in Kauai.

Hawaii Gov. Neil Abercrombie said the state was prepared for the back-to-back storms, noting the National Guard is at the ready and state and local governments were closing offices, schools and transit services across Hawaii.

Abercrombie said President Barack Obama had been briefed on Iselle, while Saturday’s primary elections, including congressional and gubernatorial races, will go forward as planned.

As residents prepared for the storms, a 4.5-magnitude earthquake struck the Big Island on Thursday but didn’t cause major damage or injuries.

Travelers faced disrupted plans when at least 50 flights were canceled by several airlines, the Hawaii Tourism Authority said. Some airlines waived reservation change fees and fare differences for passengers who needed to alter their plans Thursday and Friday.

The storms are rare in Hawaii but not unexpected in El Nino years, a change in ocean temperature that affects weather around the world.

Ahead of this year’s hurricane season, weather officials warned the wide swath of the Pacific Ocean that includes Hawaii could see four to seven tropical storms this year.