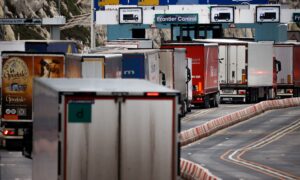 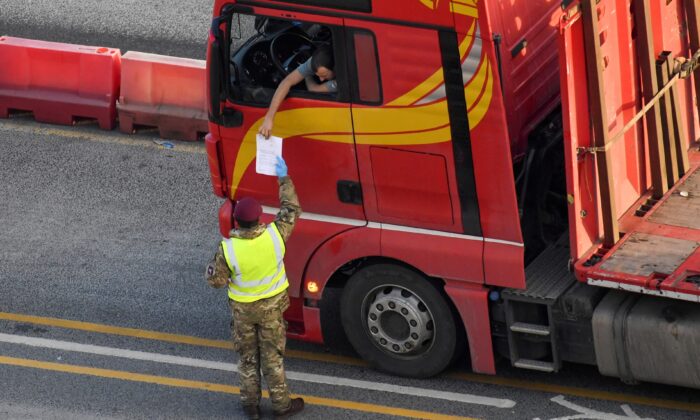 A military officer checks documents as a lorry driver waits to enter the Port of Dover in preparation for crossing the channel to France, following the CCP virus disease (COVID-19) outbreak, in Dover, Britain, on Dec. 31, 2020. (Toby Melville/Reuters)
WORLD

LONDON—Certain lorry drivers arriving in England will need to take COVID-19 tests in a bid to tackle the spread of any future variants, the government said on Sunday as Heathrow Airport lobbied for the easing of an overseas holiday ban from mid-May.

From April 6, Hauliers arriving from outside Britain and Ireland for more than two days will need to take a test within 48 hours and one every 72 hours thereafter as part of the new rules.

“This is to ensure we keep track of any future coronavirus variants of concern,” transport minister Grant Shapps said.

Prime Minister Boris Johnson suggested earlier this week that Britain might need to tighten restrictions on arrivals from France.

Most foreign travel is currently banned but the government’s Global Travel Taskforce (GTT) is due to report at the start of April on rules due to come into force from May 17.

In its submission to the GTT, Heathrow Airport backed a four-tier system that would impose hotel quarantining and tests for the worst affected countries on a sliding scale of restrictions to a ‘green list’ where limits are eliminated.

“Restarting trade and travel to key markets like the U.S. after May 17th will be key to the Government achieving its Global Britain ambitions,” said CEO John Holland-Kaye.

The Sunday Times reported that overseas vacations would be unlikely until August, whilst The Sun newspaper said ministers were considering a three-tier traffic light system alongside the use of vaccine passports and testing to unlock trips.

Culture minister Oliver Dowden told Times Radio on Sunday a number of factors were being considered amid rising infections on parts of the continent.

“We need to ensure that if there is international travel, it’s done in a safe way,” he said.