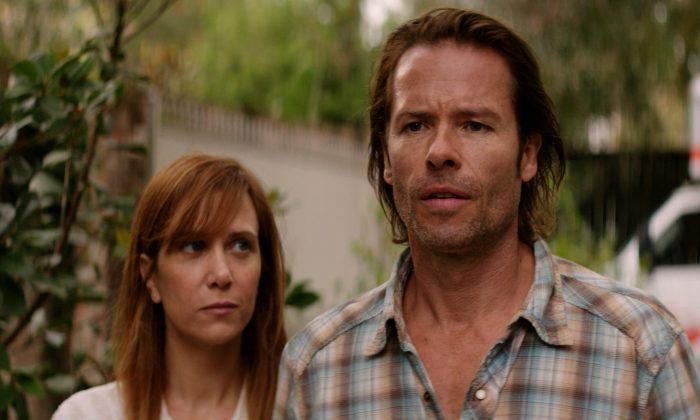 Good love is hard to find. When you find it, hang on tight. Then again, if you really love someone, let them go. Right?

Is love predestined? Do babies bring parents together? Who knows? What’s your love story?

“Hateship Loveship” is a sweet little movie, bordering on boring, about how yin rescues yang.

Blown like a tumbleweed from family to family, hers is a world of employers’ guest-bedrooms, kitchens, bathrooms, and closets.

You know that faint motel “ick” factor, where you don’t really want to touch the bed quilts? Where it takes a day to get over yourself and just own it? Johanna’s immune to “ick.” Johanna runs her finger over a closet’s dusty shelf with a professional’s eye.

Her first ancient charge declares one morning that she’d like to wear a blue dress. When Johanna returns to the room, the old woman’s dead. Johanna puts the dress on the corpse anyway, because she’s nice like that.

Meanwhile, Ken’s busy getting… not low… and trying to con the quietly irate Mr. McCauley into pouring money into a motel Ponzi scheme. He’s a charming loser who calls Johanna “gorgeous,” setting her quietly a-flutter.

Johanna writes Ken a “Nice to have met you” letter. The mean girls intercept it. They write a fake one back. It of course stirs up longing of immense proportions. It stirs up buying dresses to get married in. It stirs up passionately kissing the bathroom mirror, and daydreaming while scrubbing floors.

They con Johanna into getting an email account at the local library, so she and Ken can correspond more quickly.

Meanwhile, we cut to Ken living in the dive hotel in Chicago, with a “professional” woman (Jennifer Jason Leigh) named Chloe. They do lots of addict activities.

Arriving in Chicago, she finds the Oasis Hotel—a dilapidated wreck. She climbs through a window and finds Ken in bed with either the flu or withdrawal symptoms. He has no idea why she’s standing there in her little green dress she bought to get married in. And of course he has no computer.

She’s devastated. She starts cleaning. She cleans and cleans. And scrubs. It’s all she knows.

The “girlfriend” gets fired. Why? Because Johanna is Supermaid. She cleans every last speck and straightens his socks. Her favorite phrase is, “I’ll get dinner started.”

Who’s going to argue with this overabundance of codependent caretaking? Certainly not Ken.

Soon he’s making her breakfast in bed. They start renovating the hotel together. Take a wild guess whether Johanna has renovating talent.

This is a film about healing. It’s about burnt-out yang being cultivated, weeded, fertilized, and watered by yin to grow a relationship tree.

What we see here is codependent caretaking, yes, but maybe sometimes caretaking is to nurturing what ADD is to daydreaming, or what bipolar is to moody. The lines are certainly blurred in this movie.

The acting is fine all around and Wiig’s a revelation, but then, the truly funny comedic actors can always bring the drama. The same can’t be said of all stand-up comedians. That’s a related, but different animal.

Nick Nolte’s voice is a strangled mess—sounds like too many cigarettes. That stuff’ll kill ya, Nick! His next role should be “Man detoxing at a Canyon Ranch spa.”

Good love is hard to find. What’s your love story?