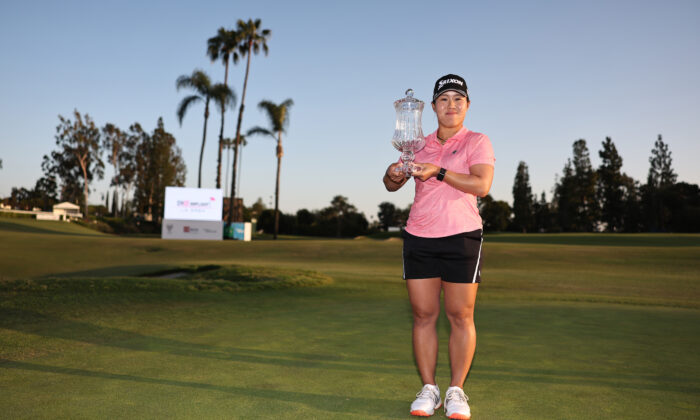 LOS ANGELES—Nasa Hataoka was in control, easily winning the DIO Implant LA Open on Sunday at Wilshire Country Club by five strokes with a score of 269, 15-under.

The 23-year-old Hataoka shot the low final round of 67, after consistent opening rounds of 67–68–67, to win her sixth LPGA Tour event; she had also won six titles in her native LPGA of Japan Tour.

The 5’2″ Hataoka won the 2016 Japan Women’s Open Golf Championship as the youngest player and first amateur to win a JLPGA major; and turned professional following the victory.

She then would finish 14th in the LPGA Final Qualifying Tournament to earn a LPGA Tour card for 2017.

With the victory, Hataoka places sixth in the Rolex World Rankings, and seventh in the Race to the CME Globe Rankings.

Hataoka took the lead late Saturday after World #1 ranked Jin Young Ko had a catastrophic quadruple on the 17th hole after a bogey on hole #16, shooting a score of 72. Ko would finish tied for 21st with five others.

“I did have a lead, but obviously this course, this challenging course, you never know what’s going to happen,” Hataoka said. “I was able to focus until the last putt.”

Hataoka had just missed the cut the previous week at the LOTTE Championship in Hawaii with rounds of 75 and 77 under windy conditions.

“I don’t know if I can compare this, but on the PGA Tour, Jordan Spieth missed the cut at the Masters and then won Heritage,” Hataoka said. “So you never know what’s going to happen in golf.”

Hataoka started the final round with four birdies on the front nine; par four holes #1 and #5, and par three holes #4 and #7, centered with a bogey on #6. She would par every hole thereout except for an eagle on the par five #15 making a 35-foot putt, and a bogey on the last hole to close out the tournament.

“That eagle really helped me kind of relax a little bit, kind of feel like I was putting really good today,” Hataoka said, taking a six stroke lead at the time.

“To be honest, the first day, I wasn’t feeling good with my iron game. But the seventh hole, I had something that clicked inside me, so that really helped me through all week,” she said. “Putting-wise, (California) poa annua greens are really difficult to play, but my experience on this type of green helped me a lot.”

Attempting to catch Hataoka was second place finisher, Hannah Green of Australia, who was five strokes behind with a total score of 274. Green shot a solid round of 68 Sunday but was unable to get close to challenge the lead.

“Definitely, really happy with how things are trending,” Green said. “It was nice to be a bit more consistent. Last week, I got off to a great start and then just couldn’t maintain it in Hawaii. So, I feel like once I get the putter hot, I’m pretty excited to see what’s to come.”

A three-way tie for third with 277 were 2019 winner Minjee Lee of Australia, Madelene Sagstrom of Sweden, and future Hall of Famer Inbee Park of Korea.

“The greens are just really tough,” Park said. “I wasn’t able to make too many putts today, but I was able to get a few good up-and-downs. So, happy with the round. It was steady, but it was definitely tricky out there.”

Three Americans tied with You Liu of China for tenth, including tour veteran Marina Alex of New Jersey, 20-year-old Yealimi Noh, and Lilia Vu in her second top ten finish this season. Vu played college nearby at UCLA, fielding eight alums in this week, and is a native from neighboring Orange County.

Defending champion, Brooke Henderson of Canada, missed the cut struggling on the first day of strong winds with scores 76 and 72.

The LPGA Tour moves south-west to the coast in L.A. County to first edition of the Palos Verdes Championship from April 28 to May 1.