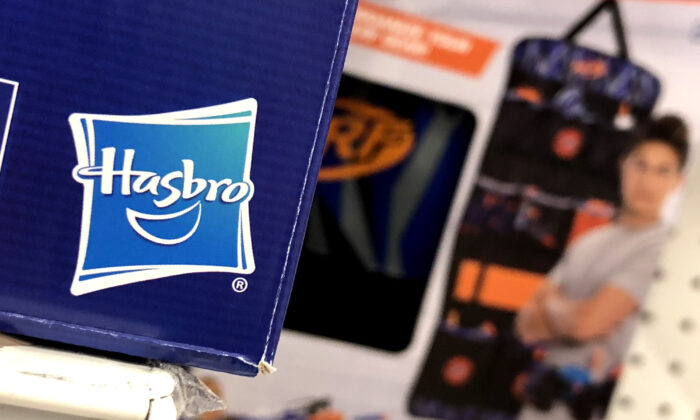 In this file photo, Hasbro toys are displayed at a store in San Rafael, Calif., in February 2019. (Justin Sullivan/Getty Images)
US News

Hasbro has reportedly suspended a whistleblower who leaked an internal training session at the company that claimed children as young as 2 years old can harbor racial biases. The toy-making giant claimed that the leaked information “mischaracterizes” the company’s values.

The training material was shared with and published by Project Veritas, a nonprofit undercover journalist outfit known for exposing anti-conservative bias in media and tech companies, by using what founder James O’Keefe has called “guerrilla journalist” tactics. The Conscious Kid, a California-based organization that describes itself as “dedicated to equity and promoting healthy racial identity development in youth,” provided the training for Hasbro.

The recorded training session, echoing the claims of the quasi-Marxist critical race theory (CRT), instructed Hasbro employees that racist behavior could be found in their youngest customers.

“[Children] as young as 2 are already using race to reason about people’s behaviors, and we may see this play out in daycare or on the playground and how kids are starting to choose or exclude playmates and friends,” Katie Ishizuka-Stephens, a co-founder of The Conscious Kid, said in the video.

“By age 3, children are already starting to apply stereotypes, and research shows that they also may use racist language intentionally at this age. White children at this age may report explicit or overt negative attitudes towards people of color. By age 4, kids are showing a strong and consistent pro-white, anti-black bias.”

The whistleblower, David Johnson, told O’Keefe that he found it “absurd” to teach as fact the claim that 2-year-olds could display racial biases and that he wanted parents to be aware of the “indoctrination of children” currently at play in the company.

“They want to introduce children into racial bias at an early age, before they’re really able to understand what race and racism is,” said Johnson, who is black.

In an interview with Fox News, Johnson revealed that he’s been suspended from work since July 19, the day after Project Veritas released recordings of the Hasbro training session, as the company investigates whether he violated a confidentiality clause in his contract.

“CRT teaches people—and at Hasbro, they wanted to teach children—to judge people based on race. And that’s not something that I think Dr. Martin Luther King would’ve supported,” he told Fox News’ Sean Hannity. “That’s something [King] wanted to end in this country. It’s not the correct path forward that we should be taking.”

In response to the report, Hasbro claimed that the training has been “mischaracterized,” and that the guest speaker’s statement wasn’t meant to be shared among all of the company’s employees.

“Project Veritas’ report mischaracterizes Hasbro and our values,” Hasbro said in a statement to The Hill, noting that the company would “occasionally invite third-party speakers for optional sessions to discuss diverse viewpoints.

“The referenced session was not mandatory training; it was an optional webinar attended by a small group of employees. As always, the views expressed by external speakers are their own and do not reflect the views of the company.”

Rooted in the Marxist critical theory, CRT interprets society through the lens of a racial struggle between white and non-white people who are assigned the roles of “oppressors” and “oppressed,” respectively. Critical race theorists see inherent racism in the foundations of Western societies, such as legal reasoning, Enlightenment rationalism, and constitutional law, and seek to fundamentally transform those societies to end that claimed racial oppression.