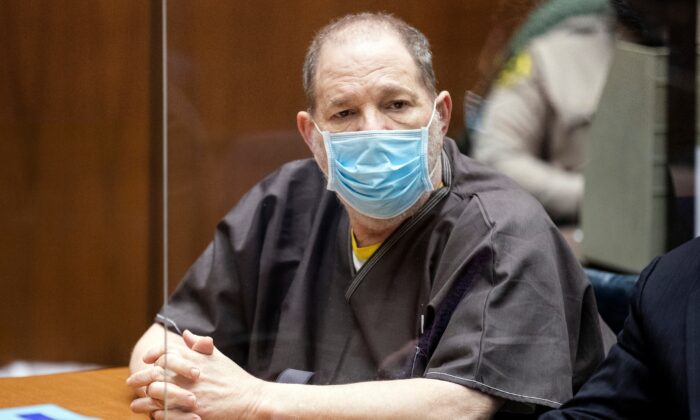 Harvey Weinstein, who was extradited from New York to Los Angeles to face sex-related charges, listens in court during a pre-trial hearing in Los Angeles on July 29, 2021. (Etienne Laurent/Pool via Reuters)
Judiciary

Convicted rapist Harvey Weinstein has been granted an appeal of his rape and sexual assault conviction by the New York State Court of Appeals, his lawyers confirmed.

The appeal comes nearly two years after Weinstein, 70, was convicted of sex crimes, including third-degree rape.

Chief Judge Janet DiFiore “granted leave to appeal” on Aug. 19 pertaining to the appeal of his 2020 sex crimes conviction in Manhattan, a copy of which was obtained by the Daily Mail Online.

Weinstein’s attorney confirmed the news in a statement to CBS News.

“We are grateful that Chief Judge DiFiore acknowledged the unique legal issues in this case and we are hopeful the entire court will find that Mr. Weinstein did not receive a fair trial and reverse his conviction,” attorney Arthur Aidala said.

In a separate statement to ABC News, Weinstein’s attorney said the court’s decision “demonstrates that there is, in fact, merit to the appeal” and that “there was plenty wrong with the trial and conviction and Harvey’s attorneys will do what is needed to prove his innocence of the charges.”

In a statement to CBS News responding to the ruling, which was issued by a spokesperson for Weinstein, the ex-Hollywood film producer declared his innocence.

“I am innocent of these charges, and I am so grateful to my attorneys for working hard and smart on this,” he said. “Their hard work will help me prove my innocence in the end. I look forward to this opportunity to be heard by The New York Court of Appeals.”

Weinstein was convicted in February 2020 of committing a criminal sexual act in the first degree for forcing oral sex on a former production assistant in 2006 and third-degree rape for sexually assaulting an actress in a New York hotel room in 2013.

Weinstein was sentenced to 23 years in state prison.

His lawyers have argued over whether he had a fair trial, claiming that several witnesses were allowed to testify despite there being no charges about Weinstein’s activities with them, Page Six reported. They also said a juror who wrote a novel about sexual predators should have been disqualified.

He was extradited to a Los Angeles jail last year and is awaiting another trial scheduled for Oct. 7. Five women have accused him of sexually assaulting them between 2004 and 2013.

“It is unfortunate that his New York victims won’t have the finality that they deserve; however, we remain steadfast and committed to seeking justice for the women harmed by Mr. Weinstein’s alleged predatory actions in Los Angeles,” Gascón said.

Officials in the Manhattan District Attorney’s office didn’t respond to a request for comment.