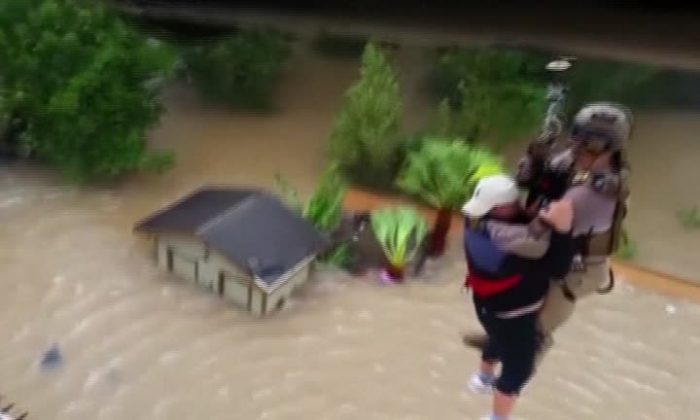 Floodwaters from Tropical Storm Harvey are likely to rise as more torrential rain pounds the United States (U.S.) Gulf Coast, where at least eight people have already been killed in Texas and tens of thousands driven from their homes, officials said on Monday (August 28).

Thousands of National Guard troops, police officers, rescue workers and civilians raced in helicopters, boats and special high-water trucks to rescue the hundreds stranded in the catastrophic storm that has crippled Houston, the nation’s fourth-largest city.

A tearful Phylis Booker, 57, said this is the worst situation she had ever faced after she and her grandchildren were rescued by the Texas National guard and taken to a shelter in Aldine, north of Houston.

Harvey has already dumped more rain in the past few days than some affected areas normally see in a year. The storm was the most powerful hurricane to strike Texas in more than 50 years when it hit land on Friday (Aug. 25) near Corpus Christi, 220 miles southwest of Houston.

The worst is far from over because the slow-moving storm will continue to dump rain over the next few days in an area hit by “unprecedented” flooding, the National Weather Service said. Forecasts show that some spots in and around Houston could see an additional 12 inches of rain on Tuesday (Aug. 29), bringing the total rainfall from Harvey to about 50 inches in parts of the city’s metro area.


Among the most recent fatalities from the storm was a family that included two adults and four children who were believed to have drowned after the van they were in was swept away by floodwaters in Houston, authorities said on Monday. In scenes evoking the aftermath of Hurricane Katrina in 2005, police and Coast Guard teams have each rescued more than 3,000 people, plucking many from rooftops by helicopter, as they urged the hundreds more believed to be marooned in flooded houses to hang towels or sheets outside to alert rescuers.