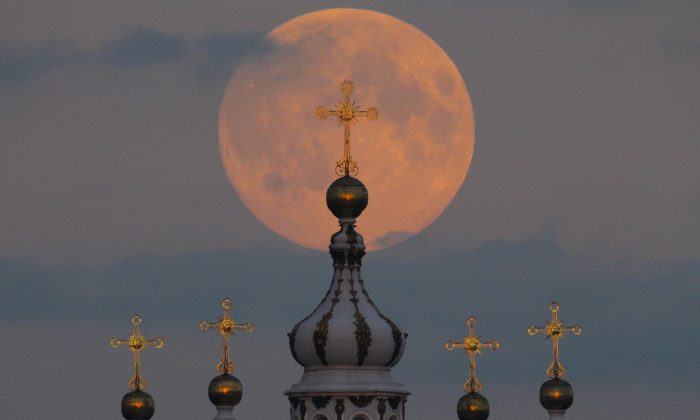 The full moon is seen rising in the sky above the domes of the Smolny Cathedral in St. Petersburg, Russia, Monday, Sept. 8, 2014. Monday night's full moon, also known as a Harvest Moon, will be the third and final "supermoon" of 2014. The phenomenon, which scientists call a "perigee moon," occurs when the moon is near the horizon and appears larger and brighter than other full moons. One of St. Petersburg landmarks, the Smolny convent's main church was built between 1748 and 1764 by Italian architect Francesco Bartolomeo Rastrelli. (AP Photo/Dmitry Lovetsky)
Science

The Harvest Moon is rising on Monday night, and has already risen in some places around the world.

This full moon is dubbed the Harvest Moon because it’s the full moon that’s nearest to the autumnal equinox.

It’s also the Full Corn Moon because it traditionally corresponds with the time of harvesting corn, according to the Farmer’s Almanac.

“It is also called the Barley Moon, because it is the time to harvest and thresh the ripened barley,” it added.

NASA’s Dr. Tony Phillips gives more insight into why the moon is called the Harvest Moon, noting that the moon rises sooner after dusk.

“To a non-astronomer, that might sound like celestial trivia. But to sky watchers it makes a huge difference. For several nights in a row around the time of the Harvest Moon, the moon rises at about the same time–sunset,” he wrote in a blog post.

“And you know what happens when the moon rises at sunset…. Low-hanging moons are reddened by clouds and dust. Not only that, they are swollen to outlandish size by the Moon illusion, a well-known but still mysterious trick of the eye that makes low-hanging Moons seem much larger than they really are.