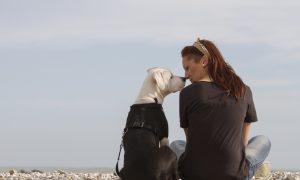 Many scientists believe that dogs dream while they sleep, and some have even speculated on the contents of those unconscious thoughts.

One of them is Harvard psychologist Dr. Deirdre Barrett who is quoted as telling People.com, “Since dogs are generally extremely attached to their human owners, it’s likely your dog is dreaming of your face, your smell and of pleasing or annoying you.”

The reason, according to her, is that animals are probably like people who tend to “dream about the same things they’re interested in by day…”

In fact, even dogs’ sleep patterns are considered to be similar to that of humans, with a Live Science report noting that the cycle typically includes “stages of wakefulness, rapid-eye-movement, [also called] REM sleep and non-rapid-eye-movement sleep.”

REM sleep is the period during which humans dream, and researchers think the same is probably true for dogs. Indications that canine pets are in this stage reportedly include barking, leg movements, and eyes shifting under closed lids.

Dr. Barrett suggests that owners can likely improve their dogs’ dreams by providing positive experiences and a good environment in which to sleep.