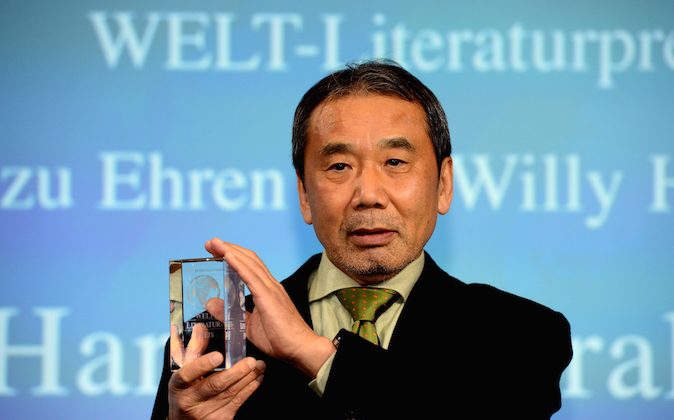 Japanese writer Haruki Murakami poses with his trophy prior to an award ceremony for the Germany's Welt Literature Prize bestowed by the German daily Die Welt, in Berlin on November 7, 2014. (John MacDougall/AFP/Getty Images)
China

The 65-year-old writer, who is best known for his works Norwegian Wood, Kafka on the Shore, Wind-up Bird Chronicle and 1Q84, was in Berlin on Nov. 7 to accept the Welt International Literature Award from German newspaper Die Welt.

In front of a crowd of about 200 people, Murakami, the first Japanese writer to receive the award since its establishment in 1999,  gave a speech about walls as barriers in the physical and literary world.

“A wall eventually becomes a fixed system, one that rejects the logic of any other system, sometimes violently.

“And the Berlin Wall was certainly a striking example of that.”

Although the Berlin Wall fell on Nov. 9, 1989, Murakami, who visited Berlin in 1983, noted that optimism for a better world after the wall’s collapse rapidly evaporated with each passing year, what with conflicts in the Middle East and the Balkans, as well as 9/11 and the global threat of terrorism.

“One wall finally collapses, the world looks different, and we breathe a sigh of relief, only to discover that another wall has been erected in another part of the world,” Murakami said.

“A wall of ethnicity, of religion, a wall of intolerance, of fundamentalism, a wall of greed, a wall of fear.

“Are we unable to live without a system of walls?”

Murakami suggests that novelists could help harness people’s imaginations and inspire a world without walls.

“For us novelists, walls are obstacles we need to break through,” he said.

“When we write novels we pass through walls, metaphorically speaking.

“We pass through walls separating reality and unreality.

“When a person reads fiction and is moved and excited by it, he may break through that wall together with the author,” the novelist continued.

“By means of a story, we’re able to imagine quite vividly a world unlike the one we live in now.”

A world without walls can thus be created by a people who go about “in a quiet but sustained effort to keep on singing, to keep on telling stories, stories about a better and freer world to come, without losing heart.”

“We can see (a world without walls) with our own eyes, we can even touch it with our own hands if we try hard.”

“I’d like to send this message to the young people in Hong Kong who are struggling against their wall right now at this moment,” said Murakami in the conclusion of his speech.

This is not the first time the Japanese author has expressed support for the underdog or brought up the theme of walls.

At the 2009 Jerusalem Prize acceptance speech, Murakami said that he will “stand on the side of the egg” that breaks against a “high, hard wall.”

Interestingly, Murakami’s “Egg and Wall” speech is the inspiration for an art installation at the Admiralty protest site in Hong Kong.

In the present system, Beijing nominates two or three candidates that “love China and love Hong Kong” for a 1,200 pro-Beijing nominating committee to select. The students want Hongkongers to be able to select their own candidates and vote them in by universal suffrage.

The protests, which started on Sept. 28, are a response to Beijing’s decision to stick to the existing arrangements for selecting Hong Kong’s top political position, as well as the Hong Kong government’s unwillingness to push the Chinese communist regime to grant the semi-autonomous region democratic reforms promised in the 1984 Sino-British Joint Declaration.