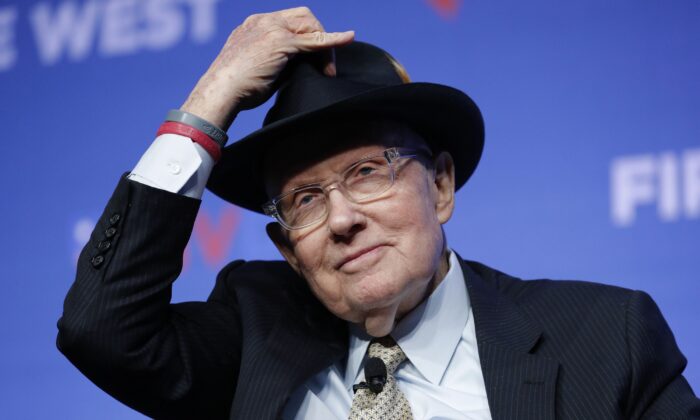 “I am heartbroken to announce the passing of my husband, former Senate Majority Leader Harry Reid,” Reid said of her husband in a statement, adding that the late Senator had passed away “peacefully this afternoon, surrounded by our family, following a courageous, four-year battle with pancreatic cancer.”

“We greatly appreciate the outpouring of support from so many over these past few years. We are especially grateful for the doctors and nurses that cared for him. Please know that meant the world to him,” his wife said.

Born in Searchlight, an isolated mining town in the Battle Born State, in 1939, Reid went on to graduate from Southern Utah State College in 1959, and then Utah State University in 1961, before attending George Washington School of Law where he graduated in 1964.

The combative Reid, once an amateur boxer, was widely acknowledged as one of the toughest dealmakers in Congress.

A moderate Democrat, Reid was a polarizing figure in the chamber. He went by the motto, “I would rather dance than fight, but I know how to fight,” much to the annoyance of his fellow lawmakers.

Reid played a huge role in passing the Affordable Care Act, advocating for land conservation, and reforming financial regulation after the Great Recession.

As majority leader, he also led the Senate in eliminating the 60-vote majority needed to vote on most presidential nominees.

In Nevada, Reid is best known for being a staunch opponent of a nuclear waste disposal site at Yucca Mountain.

However, Reid wasn’t without controversy, and famously called former president George W. Bush, a “liar” and a “loser,” although he later apologized. He also accused 2012 Republican presidential nominee Mitt Romney on the Senate floor of not paying his taxes.

He retired in 2016 after an accident left him blind in one eye.

Tributes poured in for Reid on Thursday after the news of his death, led by President Joe Biden, who called him a “great American.”

“A son of Searchlight, Nevada, Harry never forgot his humble roots. A boxer, he never gave up a fight. A great American, he looked at challenges and believed it was within our capacity to do good—to do right. May God bless Harry Reid, a dear friend and a giant of our history,” Biden wrote on Twitter.

In a statement from The White House, Biden also praised Reid for being a “leader who believed the Federal bench should reflect the diversity of America.”

“Throughout his entire career in the Senate, he led battles over budgets, fought to give our troops what they needed in battle and what they earned and deserved upon their return home. He was a bulwark against efforts to privatize Social Security. He was the champion who created Nevada’s Great Basin National Park. And, he was a leader who believed the Federal bench should reflect the diversity of America,” the president said.

Senate Majority Leader Charles Schumer (D-N.Y.) said in a statement that “Harry Reid was one of the most amazing individuals I’ve ever met,” adding, “He was my leader, my mentor, one of my dearest friends.”

Former President Barack Obama shared a letter he had written to Reid before his death in lieu of a statement. “I wouldn’t have been president had it not been for your encouragement and support, and I wouldn’t have got most of what I got done without your skill and determination,” Obama wrote.

Reid revealed in May 2018 that he’d been diagnosed with pancreatic cancer and was undergoing treatment. He told The Washington Post in June last year that he was in “complete remission” after the initial tumor was discovered on his pancreas.