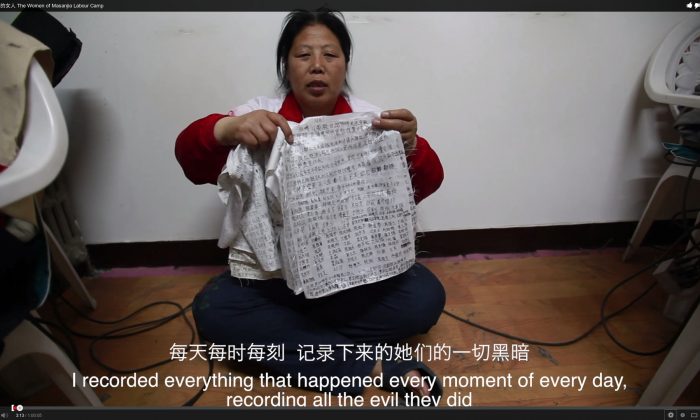 Liu Hua holds up the diaries of torture and abuse that she had smuggled from the labor camp. After saying the line that appears in the subtitle in this picture, she said: "And had the women smuggled it out their vaginas." (Screenshot via The Epoch Times)
China

Harrowing Documentary About Slavery and Torture in China Released

It would have been impossible even very recently in China to produce a documentary about torture and slavery in an officially-run labor camp, and not be thrown in jail for it. Chinese independent filmmaker Du Bin, however, has done just that, and he’s now in Hong Kong speaking at film screenings and blithely taking interviews from overseas media.

One of the protagonists of his documentary, Liu Hua, a petitioner who was tortured terribly and saw the intense torture inflicted upon others locked in the Masanjia Labor Camp, spoke directly to the camera in the film, making no attempt to mask her identity. She’s now in Beijing, and has not been picked up by the Communist Party’s secret police.

Both are signs that the times are changing in China, at least to some extent.

Masanjia, the labor camp that is the subject of Du Bin’s documentary “Above the Ghosts’ Heads: The Women of Masanjia Labour Camp,” has not been closed down, however. The last official word on the topic was that a special investigation team set up by the regime—more specifically, set up by a number of the officials and institutions that presided over Masanjia’s abuses—found that the accusations of torture were actually “malicious fabrications.”

The name of the camp came to the public in early April after Lens Magazine, known for its photography, published a lengthy exposé of the camp based on interviews with survivors. That article received a rapid and furious response on the Internet, as Chinese learnt about the extreme torture that took place at the camp, before censors shut down the discussion.

Du Bin’s documentary has been released in Hong Kong—it is still not possible to show such a film in mainland China—and will likely not gain the attention inside China as the Lens magazine article did. But it adds a great deal of texture and detail to what is known about the camp.

An example of the torture delivered at Masanjia was delivered in just the first few minutes of Du Bin’s documentary: the camera set nauseatingly upside down, with Mao’s portrait in Tiananmen Square foregrounded by Liu Hua, explaining how communist prison guards attacked the most sensitive and private place of her body.

“We emerged from our mothers’ wombs, but at Masanjia Women’s Labour Camp, we were tortured for petitioning for rights and for practicing Falun Gong,” she said. Falun Gong practitioners make up a large portion of the prisoners in Masanjia, and were used as a testing ground for much of the torture that is administered by the guards there.

“They struck our breasts and genitals with electric batons, inserted batons into our vaginas to shock us, filled our vaginas with red pepper powder, inserted toothbrushes into our vaginas and rotated them. They opened our mouths with vaginal dilators to force-feed and insult us. We don’t understand what has happened to our country.”

Liu Hua, who is not a Falun Gong practitioner, ended up in Masanjia after her husband became head of a village committee in their hometown in Shenyang of Liaoning Province, where the camp is located. He discovered corruption by the village Party secretary, and when he attempted to report it, was beaten and exiled. Later, Liu Hua was sent to Masanjia for four years for “endangering national security and opposing the party and opposing socialism.”

She was the wrong woman to have sentenced, though. She kept meticulous notes of what she calls “all the evil they did and the abuse we suffered, the corporal punishment, the beatings, the hanging in stretch positions, the Death Bed and the Tiger Bench.”

Her monologue continues: “I wrote all of this down, bit by bit. And had women smuggle it out in their vaginas.”

Much of the nearly 20,000 words of script describes the painful daily life of being locked in a labor camp and forced to work with high blood pressure and swollen legs, and food that was “a small bowl about this big of cabbage or radish that had been chopped like feed for chickens or ducks, as if it were for animals.”

Some surprising elements in the documentary include the reaction of disciplinary guards when they realize that Liu Hua is going to be released. “‘Liu Hua, don’t talk about what happened inside. It would be too revolting,'” said the brigade captain, Sun Bin.

Another guard piped up with: “Liu Hua, don’t talk about this. It would be too shameful,” she recounted. She then cursed them and said “You talk about glory all day long. What glory? The glory comes from skinning us and drinking our blood. We’re feeding you thugs. What do you have to say?” They did not have anything to say.

An informal panel discussion about the film was held in a Hong Kong bookstore, and Du Bin participated in it without appearing concerned about retaliation upon his return to China. (A blogger produced a full transcript of the event.)

NTD Television, an independent broadcaster based in New York, devoted an hour to discussing the documentary, including interviews with Du Bin and Liu Hua.

Du had first heard about Masanjia in 2004, when he was told about a torture that used toothbrushes to attack the vaginas of women. “I was shocked. I knew I had to write or create something about it.”

“The purpose of the work is very clear: it’s to give voice to the victims, and let the world hear it. And it’s to say that our world cannot tolerate this kind of abuse and torture, to prevent this torture from taking place again.”

He called the torture described “inhuman.”

“The reason I do this work is for human dignity. We’re not animals,” he said.

Heng He, a commentator on contemporary Chinese political issues who was interviewed on the show, noted that it was a “crucial time” for the Masanjia documentary to come out, amidst all the discussion of labor camp reform in China by the new Xi Jinping leadership.

“Recording history is incredibly important,” Heng He said. “We must record it today, now, so the perpetrators have no place to hide. In the past it was after the fact that Jewish people began collecting information [on the Holocaust]. But I think now, we don’t have to wait for the Communist Party to collapse to get this information.”