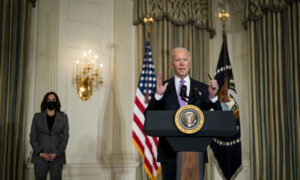 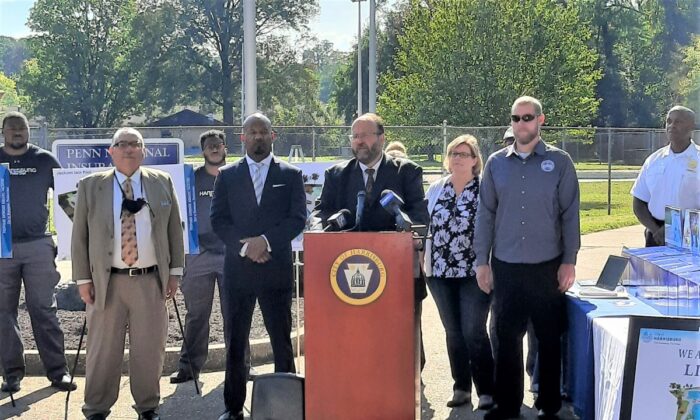 “Our pools were built in the aftermath of the racial unrest in Harrisburg in 1968,” Papenfuse said during a press conference at the Hall Manor Pool. “It was a recommendation of the Pennsylvania Human Relations Commission that we build these facilities as a matter of racial equity and social justice.”

The pools have served the city well over the past 50 years but they are beyond their useful life, the mayor said. They leak and it’s a struggle to keep them in operation.

“The American Rescue Plan funds are a one-time fund designed to help people who need help the most,” Papenfuse said. “This is a perfect use for those funds in part because this is an opportunity for youth recreation and family activities.” The two pool facilities are located on low-income Housing Authority properties in the city.

“The pools play an important role in serving a community disproportionately and deeply affected by the COVID-19 crisis. Whether it is providing recreational opportunities for our youth, summer jobs for our residents, or safe spaces for families, we need them now more than ever.”

“If you give people positive activities to do and safer places to be, we’re going to have a safer, better Harrisburg for everyone.”

Harrisburg conducted a pool study about five years ago. Before he was mayor, Papenfuse said, the pools had been closed.

“We brought them back with duct tape and everything that we had on hand,” Papenfuse said. The study showed the pools needed millions in repairs and the city didn’t have the funds.

About a year ago, they looked again at what it would take to bring the pools up to date.

“The difference now is, we have the money sitting in the city’s bank account,” Papenfuse said. The city has a time frame to spend that money and it coincides perfectly with the construction of the pools.

But first, the plan requires approval from city lawmakers. Pending the City Council’s approval during the budget process later this year, construction would begin in 2022, with one pool being renovated at a time over three years to ensure continual use.

Admission will be free for Harrisburg city residents throughout the construction period and for at least the first year, once the new pools open.

“We want access available to all of our residents—regardless of their financial situation,” Papenfuse said.

Harrisburg is surveying city residents to see what kind of features they want, such as slides, sprayers, and aquatic climbing walls.

“We did get 50 years out of these pools and with this, we can get 50 more years,” Papenfuse said.

He hinted at a soon-to-be-announced plan for the rest of the rescue plan money, including a “guaranteed income program” that Papenfuse said will be launched in the coming weeks.