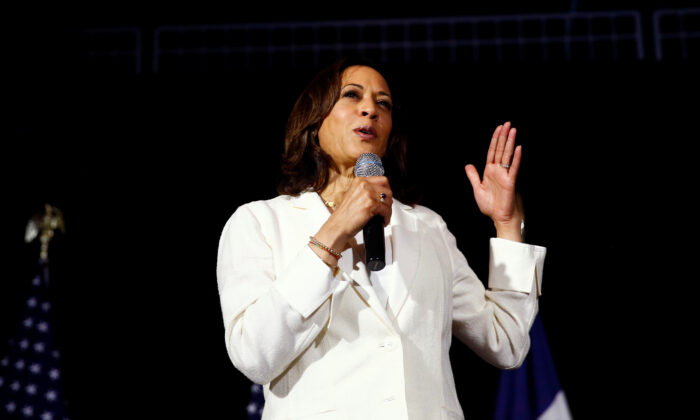 DES MOINES, Iowa—It was on the third day of a five-day bus tour across Iowa last week that 2020 White House contender Kamala Harris finally seemed to hit her stride.

Armed with fresh endorsements from two of the state’s most-sought-after political influencers on Aug. 10, the U.S. senator from California got an enthusiastic welcome from more than 500 people at a Des Moines, Iowa-area high school.

Harris, California’s former top prosecutor and a former district attorney for San Francisco, also repeated a suggestion she has made multiple times that she would “prosecute” Trump and that “we’ve got quite the rap sheet,” without elaborating what evidence exists to support her claim.

Harris, 54, is among two dozen Democrats vying for the party nomination to take on Trump in the November 2020 election.

Months after entering the presidential race as a relatively fresh face on the national stage, Harris, who is of Jamaican and South Asian descent, has ranked fourth in most national opinion polls, behind former Vice President Joe Biden and liberal U.S. Sens. Elizabeth Warren of Massachusetts and Bernie Sanders of Vermont.

Her surge in support after the first Democratic presidential debate in June in Miami, where she successfully challenged Biden’s record on race, had dissipated by the second debate in July in Detroit, where she was attacked by lesser-known rivals.

A Reuters/Ipsos poll taken Aug. 1-5 showed that Biden remained in first place with 22 percent support, relatively unchanged from the month before. Harris was in fourth, dropping 4 points to 5.7 percent support over the same time period.

But in Iowa, there are signs that her campaign could be gaining traction. A Monmouth University poll released Aug. 8 showed Harris third in the state, with 11 percent support, behind Biden and Warren.

And on Aug. 10, her campaign announced major endorsements from Iowa power couple Sue and Bob Dvorsky, a former state party chairwoman and a former state senator, who supported former President Barack Obama in 2008 in his upset over Hillary Clinton, then Clinton in 2016, when she eked out a win over Sanders.

The winner of Iowa’s Democratic caucuses has gone on to be the party’s nominee for the past six election cycles and Obama’s victory there in 2008 catapulted him from little-known junior U.S. senator to the White House.

In an interview with Reuters on Aug. 11, Harris said she felt that her performance in the second debate didn’t match her stand-out performance in Miami. But she shrugged off concerns about her momentum stalling.

“I honestly don’t pay attention to polls,” Harris said. “I hear about them but that’s not my North Star because if I had listened to the polls, I would have never run for any office I’ve run for.”