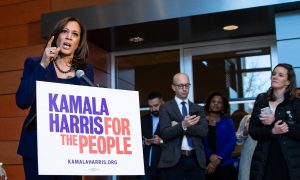 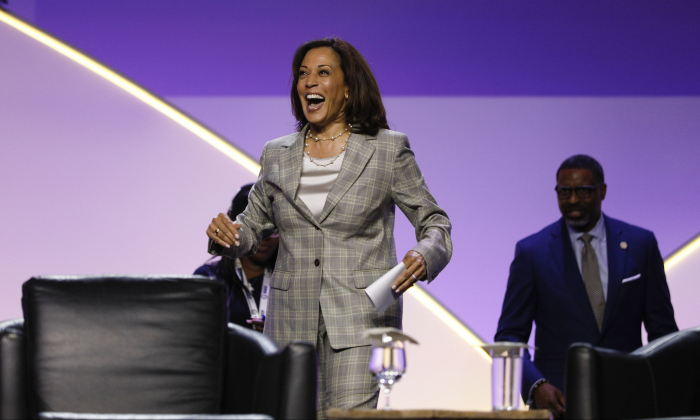 Democratic presidential hopeful Sen. Kamala Harris (D-Calif.) proposed a health care plan that would transition to a socialist “Medicare for All” system over the course of 10 years.

The Harris plan calls for a slower transition than the one socialist Sen. Bernie Sanders (I-Vt.) has long called for. Sanders envisions a four-year transition during which all private insurance plans would be eliminated in favor of a behemoth government-run system.

During the transition under the Harris plan, private insurance companies would be allowed to operate for 10 more years as long as they follow the rules dictated by the government.

The chief difference between the Sanders and Harris plans is which taxpayers will foot the bill.

According to Sanders, the government takeover of the U.S. health care sector could cost up to $40 trillion over a decade. In comparison, the total current government spending over the next decade is projected to be roughly $60 trillion.

Sanders has said that one option for paying for part of that hefty price would be a 4 percent tax increase on families making more than $29,000 each year. To pay for the difference, Harris wants to tax stock trades at 0.2 percent of the value of the transaction, 0.1 percent for bonds, and 0.002 percent for derivatives.

Harris is calling for exempting households making less than $100,000 per year from that 4 percent tax, with “a higher income threshold for middle-class families living in high-cost areas.”

Sanders estimated that his proposed tax increase would raise $3.5 trillion over 10 years, far short of the $40 trillion cost of Medicare for All. Harris didn’t specify how much revenue would be raised in the scenario she’s proposing.

The Medicare for All proposal is one of the key issues in the Democratic primary. The policy is popular with the far-left base seen as essential for winning a primary race, but is extremely unpopular with voters who want to keep their private insurance plans.

As a result, Harris’s proposal, released a day before the second round of presidential debates begins, essentially seeks to thread together the Democratic Party’s disparate camps, folding to the demands of the far-left base while shielding Harris from blowback from voters who are nervous at the prospect of losing private coverage provided by their employers.

Harris co-sponsored Sanders’s Medicare for All bill in Congress, but has had to repeatedly clarify her positions on fundamental aspects of the Democratic Party’s health care battle, including the role of private insurers.

“I have a vision of what it should be, and the existing plans that are being offered did not express what I wanted,” Harris told reporters while campaigning in Detroit.

A top adviser to Joe Biden, with whom Harris memorably clashed during the first debate, blasted the California senator’s plan as a failed attempt to please all sides in the debate and warned that her decision to push a 10-year transition obscures the full cost of her approach.

“This new, have-it-every-which-way approach pushes the extremely challenging implementation of the Medicare for All part of this plan 10 years into the future, meaning it would not occur on the watch of even a two-term administration,” said Biden’s deputy campaign manager, Kate Bedingfield.

“The result? A ‘Bernie Sanders lite’ Medicare for All and a refusal to be straight with the American middle class, who would have a large tax increase forced on them with this plan.”

Harris also got hit from the left over her health care tightrope walk. Sanders campaign manager Faiz Shakir accused her of “continuing her gradual backdown from Medicare for All” and suggested that she had been inconsistent on the issue of health care.

Topher Spiro, vice president for health policy at the left-leaning think tank Center for American Progress, lauded Harris for trying to assuage “concerns that people have about disruption and about an abrupt transition” away from a largely employer-based health insurance system.

Spiro likened Harris’s plan to the current design of Medicare and Medicaid, which he said “shows it’s possible to have a government program that provides benefits through private options that is very cost-efficient.”

Advocates of Sanders’s single-payer insurance plan were quick to criticize the Harris proposal. Adam Gaffney, president of Physicians for a National Health Program, said Harris’s plan has “several major shortcomings,” including the continuation of private insurance and the longer transition period.

“This plan continues to give private insurance a very central role in the health care system,” he said. “We have seen for decades that that does not work.”

Harris has repeatedly been forced to clear up her stance on Medicare for All. She has previously appeared to suggest that she supported abolishing private insurance, later clarifying that she doesn’t. She now calls for abolishing it in 10 years.

Sanders and Harris will debate on different nights during this week’s second primary debates, so they won’t clash in person on health care. But liberals who will share the stage with Harris, including New York City Mayor Bill de Blasio, could press the issue.