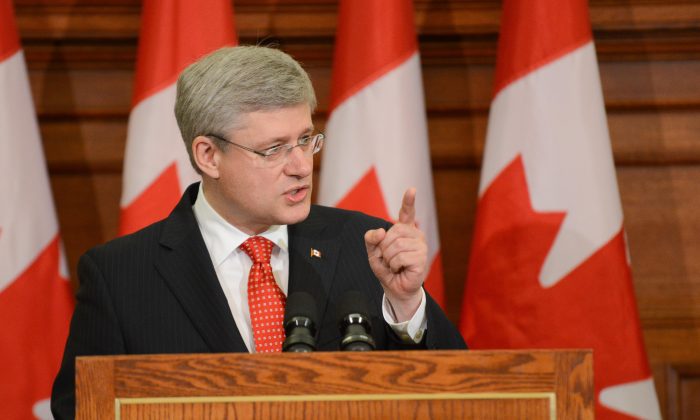 Prime Minister Stephen Harper told his caucus that the Conservatives are the party of accountability and Conservative MPs and Senators better act that way during a meeting Tuesday, May 21, 2013. (Matthew Little/The Epoch Times)
Canada

Harper is Mad, Reporters are Unruly, and Duffy’s in the Doghouse

A unusual scene played out inside a rare public Conservative caucus Tuesday morning as Prime Minister Stephen Harper worked to voice his disappointment with the Senate expense scandal.

The meeting was supposed to be Harper’s chance to set the tone on the ongoing Mike Duffy $90,000 cheque scandal, but what followed could be a sign that the issue is spinning out of control.

Everything started well enough. Tories walked into the meeting unified in what they expected and hoped to hear: the PM would voice his profound disappointment of any wrongdoing.

If that was all MPs wanted, it was what they got.

“I don’t think any of you are going to be very surprised to hear that I’m not happy, I’m very upset about some conduct we have witnessed—the conduct of some parliamentarians and the conduct of my own office,” said Harper.

He went on to note the Tories were the party that brought in the Accountability Act, and Conservative party members were expected to behave accordingly. Anyone looking to make a buck “should make other plans or, better yet, leave this room,” he said, repeating a remark he made in 2005.

The Tories want to reform the Senate, he said, but their efforts were tied up in Parliament.

It wasn’t enough to satisfy reporters though, and Harper likely realized that as his staff tried to usher them out of the caucus meeting so MPs and senators could chat in private.

As Conservatives applauded Harper’s speech and chanted “Harper, Harper, Harper,” rather than leave quietly, reporters began to shout questions and demand answers. It was the first time Harper has faced such an unruly press gallery.

It was an unusual scene that could speak as much to reporters’ frustrations with Harper’s failure to address the scandal as it does to how close the scandal has come to the PM himself.

Harper’s once-lauded Chief of Staff Nigel Wright gave Senator Mike Duffy $90,000 to pay off improperly claimed housing expenses after three Tory senators and one Liberal faced allegations of getting taxpayers to pick up costs they should have covered themselves.

Duffy used his quick repayment of the expenses as a way to shrug off an ongoing investigation of his expenses. CTV News obtained a draft of the original audit and found the Senate’s internal economy committee had watered it down before making it public to remove its sharpest findings of wrongdoing.

On Tuesday night, the Senate voted to have its internal economy committee look more closely into Duffy’s expenses. The Canadian Press has found evidence Duffy was double dipping, claiming Senate expenses for days he was helping Tory MPs campaign during the last election.

CTV also claimed an anonymous source tipped them off that Harper’s former special counsel Benjamin Perrin helped Wright draft a legal deal with Duffy to pay off the expenses and keep the Senate investigation from hitting Duffy too hard if Duffy publicly declared he would repay the money. Perrin denies any involvement.

Harper has maintained he knew nothing of the deal. That point has been central as Tory MPs face questions about what exactly went on with that $90,000 cheque.

“The message was clear,” was a phrase nearly every Tory MP repeated, sometimes more than once, after finishing that caucus meeting on Tuesday.

Speaking points neatly aligned, Tory MPs told reporters Harper knew nothing, the Senate needs to be fixed, and the Conservatives are the party of accountability and will work hard on that front.

“We’re angry, we’re upset,” said Treasury Board President Tony Clement. “Clearly, some changes have to be made in the senate accounting and how they go about reviewing their expenses.”

He said the PM is a steadfast leader, and Tories could and must step up to deal with the problem.

“I think we can all acknowledge that this is an unfortunate, unacceptable situation and we have to have better rules in place. The senate is an old institution that quite frankly the rules do not meet the standards.”

“I think the PMO has to live up to those standards as well,” he said.

Tory MP David Tilson, not one to simply repeat talking points, said he believed his boss, but wasn’t sure what exactly had happened.

“It was dead wrong what [Duffy] did, it is simple as that. The others, I don’t know anything about,” he said.

Eve Adams summarized the key point from the party’s perspective.

“The Prime Minister did not know, and that is the bottom line. The Prime Minister’s own personal ethics are beyond reproach. Nobody has ever questioned that. In fact, he leads by example, and it’s the example all of caucus should be following.”

The NDP have called on the RCMP to investigate. The force says the matter is being looked into but would not say whether an investigation has begun.

NDP MP Craig Scott has cited provisions of the criminal code and Parliament of Canada Act that could indicate Wright broke the laws that make it an indictable offence to offer or pay a senator for services relating to his or her role in the Senate.

The scandal has complicated Harper’s trip to Peru, where the main takeaway for reporters was supposed to be an agreement that could help Canadian defence companies export goods to Peru and strengthen trade generally. Canada will invest $53 million in helping Peru develop and manage its mining sector.

Instead, Harper faced questions about his knowledge of Wright’s deal with Duffy.

Harper said he did not learn about the deal until media reports came out, which is when he asked Wright to publicly disclose the details. Duffy had been trying to deny he took a cheque from Wright even after Wright confirmed it.

“I think what’s more important about this is that, not simply that I did not know, but that I was not consulted. I was not asked to sign off on any such thing and had I obviously been consulted or known, I would not have agreed with it,” said Harper.

Harper maintained that Wright repaid Duffy’s expenses as a way to get taxpayers off the hook, but said it was not an action he would have allowed.

“I am very sorry that this has occurred. I am not only sorry—I’ve been through the range of emotions. I’m sorry. I’m frustrated. I’m extremely angry about it.”

Several Tory MPs said they had heard concerns from constituents on the matter. Labour Minister Lisa Raitt said the government had to “work and work and work” to reclaim any lost faith from voters that the Conservatives were still the party of accountability.