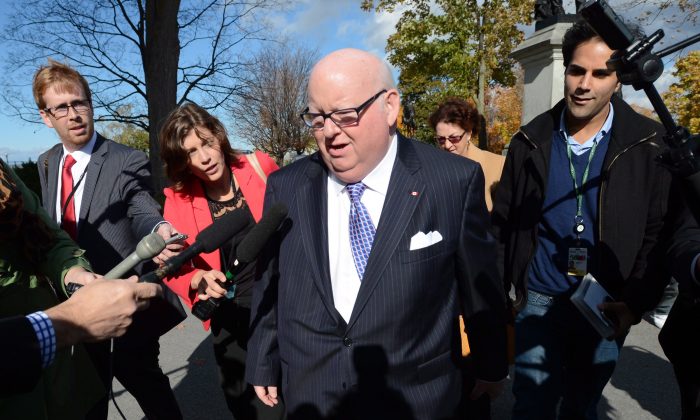 Sen. Mike Duffy is questioned by media as he arrives at the Senate on Parliament Hill in Ottawa on Tuesday, Oct. 22, 2013. In the House of Commons on Oct 23, Prime Minister Stephen Harper accused Duffy of playing the victim card because he was ordered to repay inappropriate expenses. (The Canadian Press/Sean Kilpatrick)
Canada

PM must testify under oath about what he knew of Duffy scandal, Trudeau says
By Epoch Times Staff

OTTAWA—Prime Minister Stephen Harper has mounted his most spirited defence in months on the Senate spending scandal, accusing Sen. Mike Duffy of playing the victim card because he was ordered to repay inappropriate expenses.

Harper has had little to say about the long-running scandal that has seen three of his Conservative appointees turfed from caucus and now involves the RCMP investigating Harper’s former chief of staff.

But after Duffy gave an incendiary speech in the Senate accusing Harper of underhanded tactics, the prime minister fired back in the House of Commons on Wednesday.

Conservatives are seizing upon Duffy’s claim that he was ordered to repay expenses even though he’d been assured he had done nothing wrong. As Harper said to roars of approval from his backbench today, “You’re darn right I told him he should repay.”

Harper also denied having known in advance about the $90,000 cheque his chief of staff Nigel Wright gave Duffy to pay off the senator’s expense claims.

However, opposition leaders are not satisfied.

Liberal Leader Justin Trudeau says the only way to restore public faith in the Senate is for Harper to testify under oath about what he knew and when he knew it. He says it’s high time Harper showed some leadership on the file.

NDP Leader Tom Mulcair says Duffy has directly implicated Harper, who insists he knew nothing of his former chief of staff’s scheme to pay back Duffy’s disallowed housing claims.

Mulcair says the prime minister has fostered a “culture of corruption” that’s to blame for the expense scandal and the campaign within the PMO to cover it up.

He says Harper is the common link among 13 different confidantes and advisers named in a CTV report as having knowledge of former chief of staff Nigel Wright’s plan to cut a $90,000 cheque on Duffy’s behalf.

In his Senate speech on Tuesday, Duffy denied committing any wrongdoing, as did Sen. Patrick Brazeau, who underlined repeatedly that he has never been afforded an opportunity to address the committee that found he had improperly claimed living expenses.

Speaking at the Senate on Wednesday, Sen. Pamela Wallin also said she had been found guilty without a fair hearing. She said the move to expel her from the Senate is “politically motivated.”

Duffy, Wallin, and Brazeau are facing possible suspension from the Senate without pay due to their expense claims.

Meanwhile, Sen. Carolyn Stewart Olsen, a longtime Stephen Harper confidante, is stepping down from the Senate committee that sat in judgment on colleagues embroiled in the expenses scandal.

Her reasons for leaving were not immediately clear, but she has told other senators she needs a break from her hectic schedule.

However, Stewart Olsen herself was recently accused of wrongly claiming more than $4,000 in accommodation and meal expenses at a time when she was not involved in any Senate business.

She has denied the allegation but the chair of the internal economy committee, Sen. Gerald Comeau, has asked Senate finance officials to review Stewart Olsen’s expenses and refer any irregularities to the auditor general, if necessary.

On Tuesday, Duffy implicated Stewart Olsen in the ultimatum he says he was given by the PMO—that if he didn’t pay back his disallowed $90,000 in expenses, she and fellow committee member Sen. David Tkachuk would declare him unqualified to sit in the Senate.

Stewart Olsen and Tkachuk have also been accused of whitewashing the initial committee report on Duffy to essentially exonerate him of any deliberate wrongdoing.