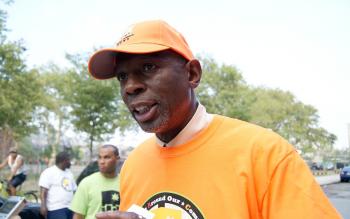 RALLY FOR PEACE: Geoffrey Canada, CEO of Harlem Children's Zone speaks with The Epoch Times at the 16th annual Peace March, held Wednesday, August 11. Over 4,000 children and youth rallied together to call for an end to violence in their community. (Margaret Wollensak/The Epoch Times)
US

Andrea Hayley
Reporting on the business of food, food tech, and Silicon Alley. Studied the Humanities for undergrad, and obtained a Master of Arts in business journalism from Columbia University. I love covering the people, and the passion, that animates innovation in America. Email me at andrea dot hayley at epochtimes.com
View profile
Follow
biggersmaller
Print
NEW YORK—The youth of Harlem today, 4,000 strong, united for a public peace march and a celebration of everything that they have achieved under the guidance of Geoffrey Canada, a visionary and pioneer of education and reform.

The march was organized by the Harlem Children’s Zone (HCZ), an organization under Canada’s leadership employing 1,500 full time staff and involving over 10,000 children and youth who participate in its web of schooling, after-school programs, parenting programs, college-support, and nutritional guidance programs.

The Peace March started 16 years ago and, along with the ever expanding programs offered by HCZ, grows in size each year.

We started the parade because “we decided that we needed to give our children the opportunity to let the community know that they are not the problem. They really want peace,” says Canada, CEO of HCZ.

"I want to celebrate all of the young people for coming out. When you can get thousands, this is our biggest peace march ever, when you can get 4,000 or 5,000 young people to march for nothing but peace and harmony, you know that is our future and that is how we are going to save our community," he added.

Harlem’s reputation and history of gun crime again made headlines after a gunfight on Aug. 8, between youth and police left a 22-year-old dead and six others injured. Fifty shots were fired in the gun battle.

“This has been a real tragedy. What people have to understand is every time you have a shooting like this it not only impacts the folks who were injured and killed, but it impacts everybody else that grows up thinking ‘oh my God, I could die at any moment.’” said Canada.

“We have an epidemic of handgun violence in communities like Harlem all over America,” he added.

Today’s parade participants wore matching white T-shirts displaying a circle emphasizing peace and unity, but on the backs were emblazoned crests of the various groups the kids belong to: “Project Class and Truancy Prevention, College Success Office, and Community Pride,” to name a few.

After the parade, the group held a rally at the newly acquired HCZ building at the historical 369th Harlem Armory. The youth groups showcased their talents and their solidarity to their family and peers.

Stanley Roger, one of the young people at the rally, wore a T-shirt with the word “Truce” on the back. He is part of the Truce Community Zone, and at 17 is a product of the best of what the Harlem Children’s Zone has to offer.

Roger plans to go to college, maybe to become an accountant because he has discovered that he likes math. If he had not found the HCZ, he is not sure where he would be.

Stanley met a guidance counselor at an after school nutrition program for middle school kids who helped him get on track after his father left town, and he had lost interest in school.

What people usually do is save a couple of kids and give them opportunities to succeed, explained Poole. But Canada doesn’t do that, he grabs the entire community: “block by block, zone by zone, that is what he is doing,” she said.