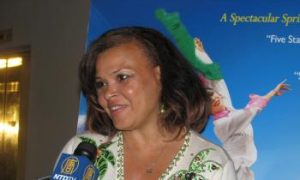 Magic Steal One From Celtics
0 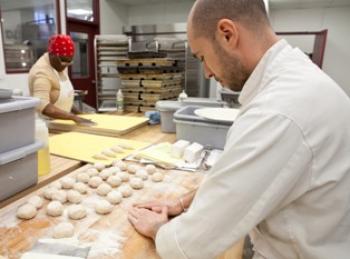 By Tara MacIsaac
Print
NEW YORK—La Marqueta in El Barrio, East Harlem, was once a thriving hub, with hundreds of stalls and up to 25,000 customers piling in on the weekends. It was at its peak in the 1950s and ’60s and remained a vital center in the community through the 1970s and early ’80s. It took a turn for the worst in the late ’80s and has continued on a steady decline up to today.

In spite of dwindling profits, five stalls remained in the dilapidated building. When Council Speaker Christine Quinn wanted to stimulate the food production industry—Councilwoman Melissa Mark-Viverito knew just the place to start. The council looked for a way to incubate small businesses in the industry, and Hot Bread Kitchen’s (HBK) proposal for the space fit the bill to a tee.

HBK is an organization that fosters the culinary and entrepreneurial skills of low-income immigrant women, while maintaining their ethnic recipes. Their specialty is bread, featuring loaves from all over the world. From Mexican tortillas to lavash, a spiced Armenian flatbread that includes a touch of honey in the dough. HBK founder Jessamyn Waldman says she is “breaducating” New Yorkers.

The idea is to provide these women with the resources and training to start their own businesses. City council spent $1.5 million on creating a state-of-the-art kitchen and culinary training space in La Marqueta. They expanded HBK’s mandate to support not only immigrant women baking bread, but any small, local food-production business looking to get a foothold.

“This being a city-owned facility, every year we were using taxpayer dollars for security, for upkeep, and really not getting very much back for it at all," said Speaker Quinn at the kitchen's opening on Tuesday. Instead, we’ve invested one-time tax-payer money into this facility and made it into this wonderful incubator that it’s going to put people to work and create companies and jobs.”

The 3,000 square-foot kitchen includes two prep kitchens, a temperature-controlled chocolate/confection room, convection ovens, fryers, tilting skillets, a grill, dry and cold storage, and classroom space. One of the prep kitchens has the potential to produce $1 million in food a day, explained Walden. The demonstration kitchen for culinary instruction is a unique feature of the new facilities.

“I don’t know anywhere else in the city you can rent this kind of space,” said Walden of the stainless steel countertops with a large flat-screen TV and an overhead mirror to provide a view of the tasty pastries prepared by Elvis Hernandez, of Daisita Bakery.

The facility is expected to incubate 100 businesses over the next five years. Two local businesses already established in the community have also expanded into the market. While changes spring up around the existing stalls, Mark-Viverito recognizes the importance of maintaining those businesses.

The new facilities cover only a fraction of the 80,000 square-foot La Marqueta. The council hopes to continue development of the site but has no definite plan at the present time.