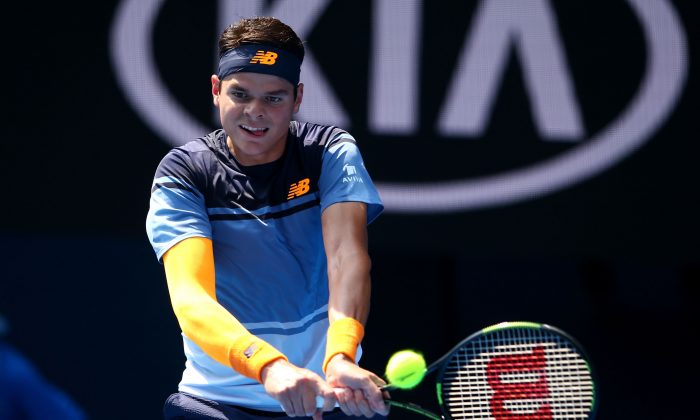 Milos Raonic plays a backhand in his fourth round match against Stan Wawrinka at the 2016 Australian Open Jan. 25, 2016 in Melbourne, Australia. (Mark Kolbe/Getty Images)
Canadian Content

Hard Work, Desire to Reach the Top Paying Off for Milos Raonic at Australian Open

Milos Raonic is closing in on the top of the tennis world through hard work and a never-ending desire to be the best.

He kicked off 2016 with nine straight wins including a title in Brisbane, in which he bested Roger Federer. He became the first Canadian man to reach the semifinals of the Australian Open after he defeated Gael Monfils in four sets Wednesday night in Melbourne.

After a disappointing 2015 plagued by injuries that saw him miss the French Open with his ranking falling from No. 4 to No. 14, Raonic is back on track to fulfill his incredible potential. He said earlier in the tournament that he hadn’t felt this good physically since last year’s Australian Open.

His fourth-round win over Stan Wawrinka was a major stepping-stone.

I feel like I’m putting in the work and I’m getting the results from it.
— Milos Raonic

Going into the match, Raonic had just one win against a top-10 player in a major—2011 over Mikhail Youzhny, not exactly a perennial in the top 10. Raonic was 0–4 against Wawrinka and had only taken one set off the Swiss No. 2.

Against the elite players in the world—of which Wawrinka is one—Raonic figured he needed to improve. He had to shorten the points, make use of his wingspan, and attack the net.

The 25-year-old from Thornhill, Ontario came to the net 83 times against Wawrinka—he called the tactic the “next step for me to achieve the goals I want to achieve.”

The grand slams for the men are one of the handful of tournaments in which they can play five sets. Raonic was on fire for the first two sets, but Wawrinka capitalized on the few chances the Canadian gave him and pushed the match to its limit.

But Raonic didn’t lose confidence in his game plan and remained the aggressor in the fifth set while Wawrinka faded. After 3 hours and 45 minutes, he got the win and was clearly the better player.

“He will do everything possible to get to the top,” said ESPN tennis commentator Patrick McEnroe.

Raonic maintained his perfect record in grand slams after winning the first two sets. It’s now up to 37–0.

His new coach Carlos Moya, not known for his net play, has been encouraging him to keep moving forward in the court.

And Raonic’s improved volleys are getting better as he spends more time at the net. He also attributes the improvement to his footwork at the net.

“In the offseason, I spent a lot of time up at the net. So it’s not just about a confidence, it’s about an understanding of what I need to do,” Raonic told reporters after his win over Wawrinka.

“I feel like I’m putting in the work and I’m getting the results from it. I’m very happy with that.”

Raonic is also using a mouth guard that prevents grinding of his teeth and relaxes his muscles. He now wears it all the time, except when he eats.

“It’s sort of like orthotics but starting from the top. You try to align everything so it sits in the right place, muscles don’t get tense,” he told the Wall Street Journal.

While some wish Raonic would show more emotion on court, there can be no question about this young man’s compassion and class.

After his third-round win on Friday, Jan. 22, Raonic addressed the crowd and television audience with heavy heart.

“Today, before I stepped out on court, it was a difficult day back home. Unfortunately in Saskatchewan in a very small community, there was a shooting at a high school so I want to take a moment and give thoughts to that community, the family, the students, and the school affected. We wish you all the best,” he said.

The La Loche tragedy had taken place hours before Raonic took the court. Raonic’s message was replayed on the national news.

“Today’s victory was for that community and a quick recovery and all of Canada and I’m sure the world is behind you,” he said.

It’s moments like these when athletes show their human side that stick with the public for years to come. Canada has a role model of an athlete in Raonic and not just for his results on the tennis court.

Up next for Raonic is No. 2 seed Andy Murray in the semifinals. The two have split their six encounters. These are the kinds of situations Raonic wants to be in. His physical and mental games are where they need to be. Now it’s about making the most of his opportunity and making more history.

“It’s an awesome feeling. Tennis is growing quickly in Canada, it’s a big honour to be part of that.”