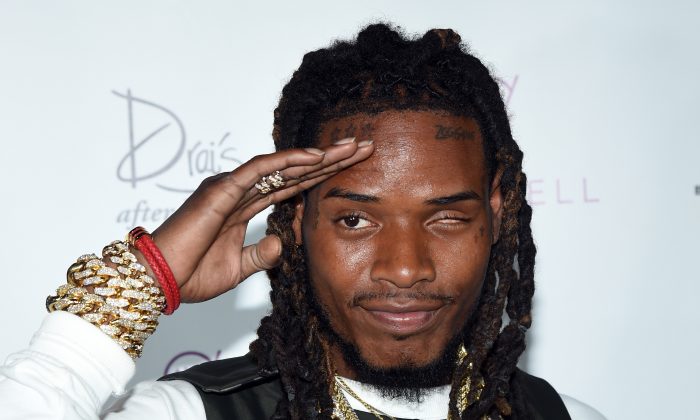 The rapper was swerving in and out of traffic as he raced another car on the Gowanus Expressway near Hamilton Parkway at 1:20 a.m. on Friday, New York Daily News reported.

When officers pulled the rapper over, he handed them an expired New Jersey license. Officers from the 72nd precinct suspected that the rapper was drunk and conducted an alcohol test.

The rapper, whose real name is Willie Maxwell, had a 0.09 blood alcohol level, which is higher than the 0.08 legal limit for driving in New York. The rapper failed another alcohol test at the precinct, police say.

Maxwell, 26, was driving a black 2012 Mercedes CLS AMG the Daily News and other media report, although Fox 5 reported that the vehicle was a 2015 Mercedes.

The rapper was born in Paterson, New Jersey. He rose to prominence after his debut single “Trap Queen” reached the number two spot on the U.S. Billboard Hot 100 chart in 2015. He also received the best new artist award at the Billboard Music Awards in 2016.

Maxwell has been blind on one eye since he was a child due to congenital glaucoma.

Maxwell is well known in his hometown of Paterson for flashy antics. Last year, he handed out cash to school children in Hackensack, New Jersey NJ.com reported. In 2016, the rapper showed up to court with $165,000 in cash to pay a $360 fine.

But the rapper’s dark side has grabbed headlines in Paterson as well. He was involved in a feud that led to a shooting in which three people were wounded.

Maxwell also filmed a music video at a local high school that featured a stripper and references to illegal drugs. The school’s principal was placed on leave following the news.

It is unclear if the rapper has a lawyer to make a comment on the arrest.