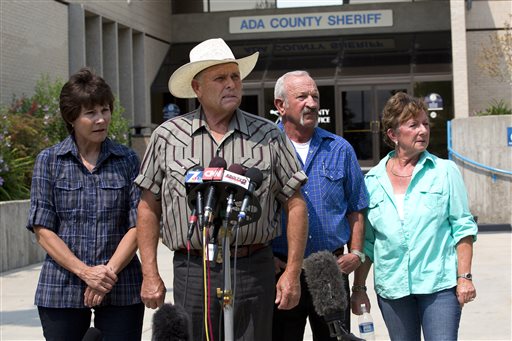 The horseback riders who encountered Hannah Anderson, a missing California teen, and her alleged abductor James DiMaggio, say the pair seemed out of place and ill-equipped for the Idaho back country.

At a news conference Sunday in Boise, the four riders – two men and two women – said they came across 16-year-old Hannah Anderson and 40-year-old James Lee DiMaggio on Wednesday morning.

Mark John said the two weren’t friendly and that the girl was wearing pajamas or sweatpants, while both were wearing tennis shoes and had no rain gear. John said when he returned home he saw an Amber Alert that had been sent out for Anderson, and he contacted police.

“Usually when you meet people in the backcountry, you have a pretty good encounter, talk about where you’ve been and where you’re going,” said the 71-year-old John, who is a former sheriff’s deputy from Gem County. “They didn’t want to talk.”

Mary Young, another of the riders, said that they asked DiMaggio what he was doing out in the wilderness and he told her that last year Hannah had picked a place to go (Hollywood) and “this year it was my turn to pick a place,” she recounted.

While the situation was strange, it could be explained, she said. “They could of been father and daughter … it was unusual, it was strange, but it was explainable.”

Mike Young said that DiMaggio was stroking a grey cat off to the side of the lake they were at while Anderson was soaking her feet in the water. “What are you doing with a cat in here?” he asked DiMaggio.

“He just kinda grinned, didn’t say much more, had a little smirk on his face,” said Young.

DiMaggio and Anderson also had what looked like all brand new equipment, which raised concerns among the riders.

Young said that at one point his wife Mary wanted to go and talk to Hannah, suspecting something might have been amiss. He said he’s not sure what would have happened but said with a wry smile that three of the riders were armed and “He might’ve gotten one of us, but we would’ve gotten him,” though none of them know if DiMaggio was armed.

The mountainous area where the pair were seen is extremely steep, and the closest point where the helicopters could drop the team of federal agents was more than a two-hour hike away. The agents crept close to the camp, waited until DiMaggio and Hannah separated, and then moved in.

The FBI moved the teen to an area where she could be picked up by a helicopter. The FBI won’t release details about what happened between DiMaggio and law enforcement at the campsite until an investigation is complete, other than to say DiMaggio was shot and killed.

FBI Special Agent in Charge Mary Rook from Salt Lake City said the FBI will continue to work with law enforcement in both Idaho and California as the case transitions back to the San Diego Sheriff’s Department.

Anderson appeared to be uninjured and was taken to an Idaho hospital where crisis counselors and health care providers were assisting her. Her father was expected to arrive in Idaho on Sunday to reunite with her.

The FBI said it was sending a team to investigate what unfolded before, during and after the shooting.

The location wasn’t far from where the horseback riders had spotted the pair.

The case began when the charred bodies of Hannah Anderson’s mother, Christina Anderson, 44, and the teen’s 8-year-old brother, Ethan Anderson, were found in DiMaggio’s burning house outside San Diego, near the Mexico border.

The original Amber Alert was sent out regionally before expanding statewide across four other states–Oregon, Nevada, Washington, and Idaho. Officials in Mexico and Canada were also on the lookout for the pair.

DiMaggio was close to the family. Christina Anderson’s husband, Brett Anderson, has described him as a best friend and said the children thought of him as an uncle.

Authorities have said DiMaggio had an “unusual infatuation” with Hannah, although the father said he never saw any strange behavior.

Tips led investigators to Oregon after DiMaggio and the teen were reportedly spotted there.

But it wasn’t until John called in his tip that investigators found a major lead — DiMaggio’s car, hidden under brush at a trailhead on the border of the Frank Church River of No Return Wilderness in central Idaho.