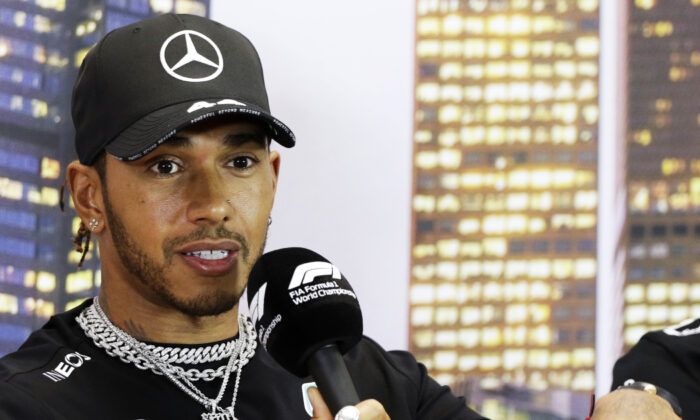 Mercedes driver Lewis Hamilton of Britain speaks during a press conference at the Australian Formula One Grand Prix in Melbourne, Australia, on March 12, 2020. (Rick Rycroft/AP)
Motorsports

LONDON—Lewis Hamilton says his drive for social justice, and campaigning for diversity, has given his life a real purpose while also helping prolong his record-breaking Formula One career.

Hamilton told Sky Sports television that his campaign, and use of his platform to push the conversation, had given him fresh energy and made him mentally stronger than ever.

“So now it’s the work that I’m doing in the background and then I’m turning up and I’m enjoying this job.

“Is it helping me race? I think so, yeah. It’s like my new drive and I feel like it’s giving me more longevity because it’s a lot of work we have to do. I feel like it also gives my life real purpose.”

Britain’s Hamilton said he had days when he did not want to train and was unsure about continuing.

“There’s definitely been times where I’m like, I don’t know if I can keep going, or maybe there’s something else I want to do. But I don’t think I’d found my purpose until last year,” he said.

“Now I feel like I have a mission in life and it’s not about just winning championships and races, that’s all cool, but actually being able to make an impact to help youngsters coming through.”

“I’m really proud of this next generation coming along, but we can still encourage them to be more invested and more understanding,” he said.

“When you’re young, all you’re thinking about is winning. You don’t have time for a lot of these other things. Well, you think you don’t, but you actually do. And that’s what we’ve got to get across.”