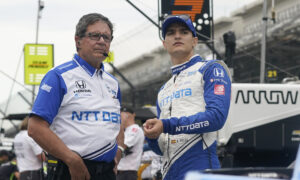 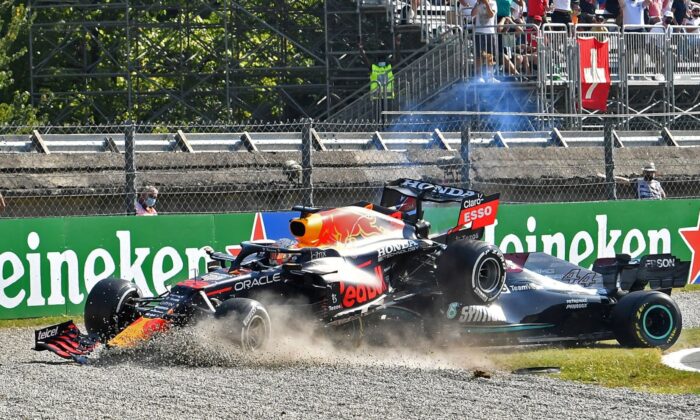 Red Bull's Max Verstappen and Mercedes' Lewis Hamilton crash out of the race at the Italian Grand Prix in Monza, Italy on Sept. 12, 2021. (Jennifer Lorenzini/Reuters)
Motorsports

Hamilton and Verstappen Blame Each Other for Monza Crash

Formula One title rivals Lewis Hamilton and Max Verstappen took each other out of the Italian Grand Prix on Sunday, with Mercedes team boss Toto Wolff slamming the incident as a “tactical foul.”

The collision ended in the gravel with Verstappen’s car wedged on top of the Briton’s, the Halo head-protection device proving its worth again with both drivers clambering out smarting but unhurt.

“The stewards are going to decide who is to blame,” said Wolff after a race that ended in a McLaren one-two with Australian Daniel Ricciardo the winner.

“I would say it was a tactical foul. He probably knew that if Lewis stayed ahead that is the race win possibly.”

Verstappen had started the day five points clear of Hamilton after finishing second in Saturday’s sprint race for a bonus two points.

The Dutch driver was running in second place but lost 11 seconds in a slow pitstop that dropped him down to 10th place while Hamilton passed Norris to take the lead with Ricciardo having already pitted.

Hamilton pitted three laps after Verstappen and they then went wheel-to-wheel, with the cars making contact and the Red Bull lifting off the kerb and into the air.

“It landed on my head but I’ll be OK,” said a sore Hamilton.

“I was racing as hard as I could, finally got past [McLaren’s] Lando [Norris] and was in the lead so they pitted me. The pitstop was slow, I lost a couple of seconds and I came out. Daniel came past, Max was coming.”

“I made sure I left a car’s width on the outside for him, I went into turn one and I was ahead and going into turn two and then all of a sudden he was on top of me.”

“He just didn’t want to give way today and he knew when he was going into two what was going to happen…but he still did it,” the Briton told Sky Sports television.

Verstappen said he had gone around the outside and “he just kept on squeezing me.”

“But he just kept on pushing me wider and at one point there was nowhere to go.”

Both were summoned to stewards after the race.

“I think our opinion would be that Lewis perhaps closed him too much into Turn Two,” said Red Bull boss Christian Horner.

“I’m disappointed that Toto would say it was a professional foul but I think it’s a racing incident and thankfully nobody was injured today.”

The title rivals have collided before this season, notably at Hamilton’s own British Grand Prix when Verstappen ended up in hospital for checks and Hamilton took the win.

Wolff said Hamilton’s car was damaged all around the halo and the wheel had been on the Briton’s head.