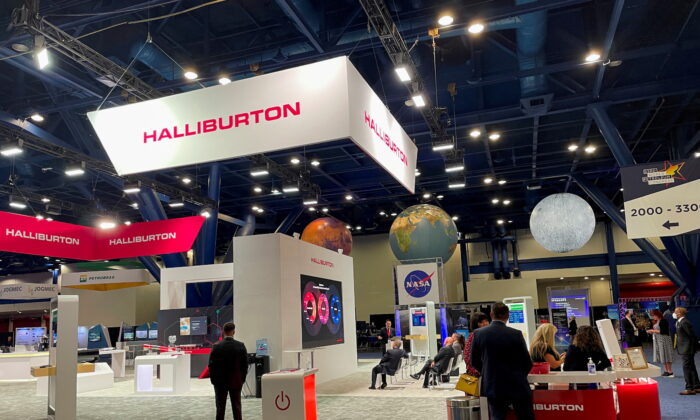 Participants observe a presentation at Halliburton's booth at the World Petroleum Congress in Houston, on Dec. 7, 2021. (Liz Hampton/Reuters)
Companies

Oilfield services firm Halliburton Co. on Tuesday posted an 85 percent rise in first-quarter adjusted profit and raised its forecast for customer spending in North America as a rally in oil and gas prices boosted demand.

Halliburton said it anticipates North American spending to grow by 35 percent this year due to stronger activity and inflation, revising higher an earlier estimate of a 25 percent increase.

Oil futures climbed to their highest in more than a decade during the quarter on market turmoil stemming from Russia’s invasion of Ukraine. U.S. oil is around $105.34 a barrel while Brent is trading at $110.25 a barrel.

Strong prices have encouraged drilling activity, sending the U.S. rig count to 673 at the end of the first quarter, up almost 15 percent from late 2021, according to Baker Hughes data.

Margins in its Drilling and Evaluation division eclipsed 15 percent in the first quarter for the first time since 2010, despite weather and supply chain disruptions, Halliburton said.

Supply chain issues that have plagued the industry since demand rebounded from coronavirus-related lockdowns will continue, it warned. Halliburton “can’t and won’t subsidize operators” and would pass on higher materials prices to its customers, an executive said.

Its hydraulic fracturing equipment is fully booked and appears to be sold out for the second half of the year.

“At $100 oil, everything is busy. And people want to be busy, but the question is, can they be busy?” Chief Executive Officer Jeff Miller told investors on Tuesday, blaming some of the supply chain constraints on years of underinvestment.

Shares were volatile as Wall Street weighed the company’s bullish comments against some softer-than-expected results, including a decline in margins from Halliburton’s Completions and Production unit and negative free cash flow of $183 million.

Halliburton recorded a pre-tax charge of $22 million in the quarter to writedown its assets in Ukraine due to the ongoing conflict.

By Rithika Krishna and Liz Hampton