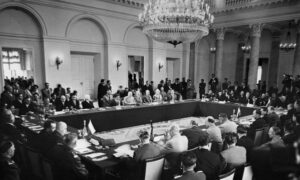 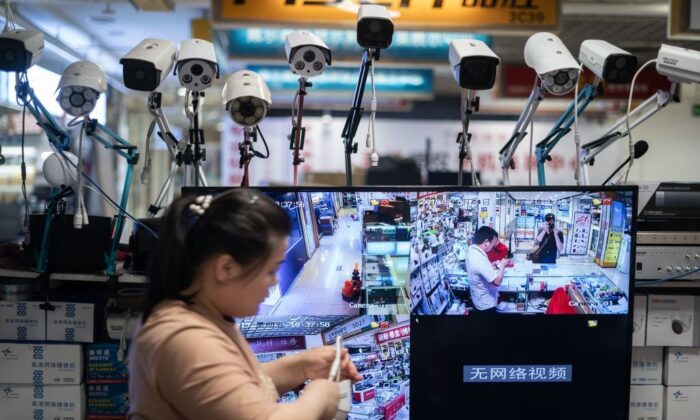 Picture of Hikvision cameras in an electronic mall in Beijing on May 24, 2019. (Fred Dufour/AFP via Getty Images)
UK

At least half of London’s boroughs have bought and deployed China-made surveillance systems linked to the abuse of Uyghurs, according to data exclusively given to the Thomson Reuters Foundation, raising alarm among privacy advocates and lawmakers.

Freedom of information requests filed in late 2020 with all 32 London councils and the next 20 largest UK city councils found about two-thirds owned technology made by two Chinese companies accused of links to the repression of Uyghurs.

In total 16 London councils had technology made by Hikvision or Dahua—both of which face strict trade restrictions in the United States.

Six London boroughs and three other councils did not respond to requests about their links with the Chinese firms, or denied having enough data to disclose what they had deployed.

“We’re getting a clearer picture of just how pervasive these firms’ technology is in the UK—and how frequently public funds are being used to acquire it,” said Woodhams, who works for internet research firm Top10VPN.

From tracking the spread of the coronavirus pandemic to tackling crime, surveillance tech is increasingly being rolled out worldwide for safety and public health reasons, but critics have raised concerns over privacy and discrimination.

The FOI data shows the extent to which Britain relies on Chinese surveillance tech despite parliament probing Hikvision’s human rights record and the United States blacklisting both firms for links to the persecution of Muslim minorities.

The expose comes after nine MPs wrote to the home secretary in 2019 raising concerns about the fact Hikvision was the top supplier of CCTV equipment to Britain in 2016.

Liberal Democrat MP Alistair Carmichael, who co-wrote the letter, told the Thomson Reuters Foundation the government should ban the acquisition of Hikvision and Dahua technology.

“We should not be working with companies that facilitate repression,” he said in an emailed statement, adding that local councils should not acquire tech from the firms “until they demonstrate a change in policy.”

Local councils are a key investor in UK surveillance infrastructure, Woodhams said, as they are responsible for buying and deploying cameras in public spaces like streets, car parks, and housing.

The FOI requests revealed councils have acquired a wide variety of Chinese technology, from cameras to surveillance hardware, including digital video recorders and network video recorders, which allow for the storage and analysis of footage.

None of the local authorities in Britain said they had used the Chinese technology for facial recognition.

But for example, the council of Hammersmith and Fulham in west London disclosed it owned 1,790 “Dark Fighter” Hikvision cameras. They are designed to see in low light and some models can pick out licence plates, according to a Hikvision brochure.

The Chinese tech tools are part of a rolling upgrade of camera systems that have been in place across Britain for decades, said Silkie Carlo, director of privacy group Big Brother Watch.

“There’s an idea many people have about CCTV cameras that they are just passive recordings, but what we have to acknowledge is that it’s increasingly active surveillance,” Carlo said in a phone interview.

A Hikvision spokesman said the company is “committed to respecting all UK laws, guidelines and regulations set by authorities.”

“As a manufacturer that does not sell directly to the end user, we do not oversee the operation of our products, but we do ensure our cameras are designed to protect public safety,” the spokesman said in emailed comments.

Dahua did not respond to a request for comment.

A spokeswoman for the UK Ministry of Housing, Communities, and Local Government said it had advised all councils of risks posed when purchasing new technologies and referred them to the National Cyber Security Centre’s guidelines on supply chains.

A spokeswoman for the Information Commissioner’s Office said that councils are expected “to follow data protection law,” adding that the ICO did not regulate which surveillance vendors councils did business with.

Surveillance cameras equipped with facial-recognition software can track criminals by scanning people in public spaces and using AI to compare them to police watchlists of people being sought.

Several British forces have joined others around the world in using such devices in recent years, with police saying it allows smarter policing.

A British court ruled last year that the use of facial recognition by the South Wales Police force to hunt for suspects breached privacy, data protection, and equality regulations, which campaigners hailed as a “major victory” in their fight against surveillance.

The council of Cardiff in Wales disclosed it had 40 Hikvision cameras, though it did not reveal the models.

A council spokesman said the cameras were acquired by a third-party tasked with maintaining its surveillance infrastructure, and it was not aware of any UK ban on Hikvision technology.

The London council of Wandsworth disclosed it was upgrading its existing CCTV surveillance system with a network of online cameras supplied by Dahua, adding it had no plans to run facial recognition on the footage. The council did not respond to a request for further comment.

All UK councils that bought Chinese technology said in their FOI responses they were not currently deploying facial recognition systems.

But several acknowledged owning additional hardware beyond cameras—including digital video recorders and network video recorders—that could be configured to carry out facial recognition or other analytical tasks, Woodhams said.

“Even if it’s (tech) not being used for the most intrusive capabilities at the moment it wouldn’t be that much of a jump to do it,” he said, noting that both Hikvision and Dahua make facial recognition systems.

Carlo said, “aside from facial recognition there are other kinds of processing that can go on … it might be anomaly detection, different kinds of behavior analysis, demographic analysis.”

These tools risked harming marginalised groups, she added, citing the profiling of Muslims in counter-terrorism operations and the misidentification of Black faces by facial recognition systems.

Caitlin Bishop, a campaign officer with the UK-based digital rights group Privacy International, urged councils to “stand up and explain why they need this tech, and how much they have.”

“Instead, they are buying it quietly and hoping nobody finds out,” she said in a phone interview.

Woodhams, the researcher who filed the FOI requests, said there had been “very little public discussion about the procurement process” and no available data on the amount of taxpayer funds spent on surveillance technology.

The council did not respond to a request for comment.

Only one council, Camden in London, said it had a policy against buying certain Chinese-made surveillance technologies, although the FOI response revealed it still operated a Hikvision video recorder.

A spokeswoman said the council would “replace any CCTV equipment not found to be compliant (with its policy), as a priority.”

Lawmakers and human rights groups have voiced concerns over British links with Hikvision and Chinese tech firms they say have designed Uyghur detection systems, with facial recognition tools that can alert authorities to peoples’ whereabouts.

The United Nations estimates more than one million Chinese Muslims, many of whom are from the minority Uyghur ethnicity, have been detained in the province of Xinjiang, where activists say crimes against humanity and genocide are taking place.

China has denied any abuse and says its camps in the region provide vocational training and help fight extremism. The Chinese embassy in Britain did not respond to a request for comment.

The debate over the role of corporations in China’s treatment of the Uyghur is increasingly spilling over internationally, with the United States applying sanctions to Chinese tech firms accused of abetting the persecution.

In August 2020, the U.S. government barred all federal contractors from buying goods or services from any company that uses products from five Chinese companies including Hikvision and Dahua.

Aziz Isa Elkun, a Uyghur activist based in London, said UK councils’ acquisition of Chinese cameras was “shocking” and undermined the British government’s pledge to prevent goods linked to the Xinjiang region from entering the supply chain.

“These concentration camps are testing grounds for Chinese technology—they test them on the Uyghur … and then they go commercial and try to make money from it,” he said in a phone interview, also calling for a ban on the technology.

A Hikvision spokesman said, “we have been engaging with the UK government and stakeholders to clarify misunderstandings about the company and address their concerns.”

Carlo said the Chinese tech companies should not benefit from public funds.

“It’s a problem for UK taxpayers to be funding firms that work hand in hand with the Chinese state, that do ethnic profiling, and enable what looks like ethnic cleansing … we can’t tolerate our own Chinese-built panopticon,” she said.