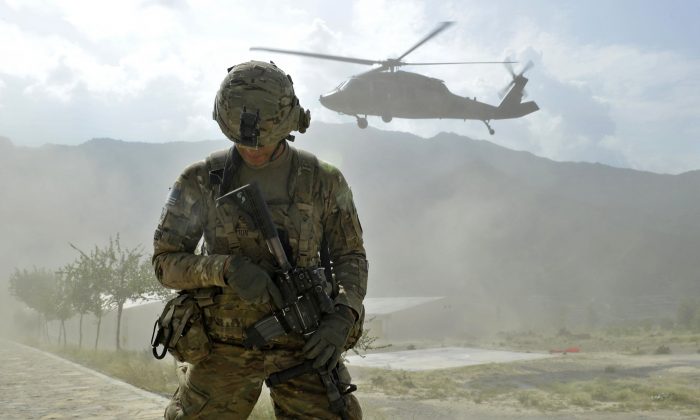 A soldier from the U.S. Army's Bravo Company 2nd battalion 27th infantry regiment secures a landing zone for a Blackhawak helicopter at the Shigal district center in Kunar province on Sept. 15, 2011. Tauseef Mustafa/AFP via Getty Images
US

Hagel’s speech was an outline of the defense budget, which President Barack Obama will submit to Congress next week.

“As we end our combat mission in Afghanistan, this will be the first budget to fully reflect the transition DoD is making for after 13 years of war—the longest conflict in our nation’s history,” Hagel said in the Pentagon Press Briefing Room on Feb. 24, according to a transcript.

The plan is to reduce the Army from around 520,000 active-duty soldiers to between 440,000 and 450,000. The original plan was to reduce the Army to 490,000 soldiers. According to the Pentagon’s Armed Forces Press Service, about half the defense budget goes toward personnel costs.

“Since we are no longer sizing the force for prolonged stability operations, an Army of this size is larger than required to meet the demands of our defense strategy,” Hagel said.

The Army isn’t alone. The reduction is part of the Pentagon’s $75 billion budget cut over the next two years, which will affect all branches of the armed services.

Cuts to the Army were expected. Defense officials have been debating for years the role the U.S. Army plays in current defense strategies—particularly the Air-Sea Battle Concept. It is now being applied in the U.S. military shift to the Asia-Pacific, which was partly intended to break China’s anti-access strategy to deny military access to the region.

The concept was developed in the 1970s and 1980s “to counter a Soviet-backed arms attack in Europe,” according to a Pentagon report. It involves close coordination between different military branches, particularly the Navy and Air Force.

The Army has been trying to find its place in the strategy, and military leaders have been discussing the role the Army can play since at least 2011, when the Pentagon opened its Air-Sea Battle Office. Of the 15 officers in the Air-Sea Battle Office, only one is from the Army.

The Army has trouble shaking its role as a force that creates infrastructure and stabilizes whatever ground is taken. As the Pentagon’s American Forces Press Service notes, “The cuts assume the United States no longer becomes involved in large, prolonged stability operations overseas on the scale of Iraq and Afghanistan.”

Hagel emphasized, however, that the cuts are done with consideration to the evolving threats faced by the United States.

He said, “We are repositioning to focus on the strategic challenges and opportunities that will define our future: new technologies, new centers of power, and a world that is growing more volatile, more unpredictable, and in some instances more threatening to the United States.”