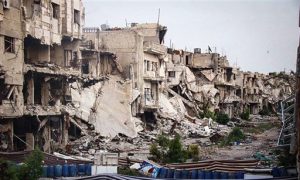 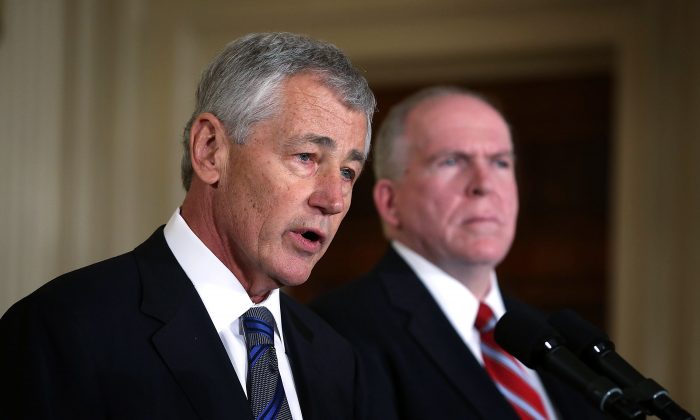 Secretary of Defense Chuck Hagel speaks during a personnel announcement in the East Room at the White House in this file photo. At a daylong symposium at the Washington Institute for Near East Policy, Hagel discussed the tumultuous situation in the Middle East. (Alex Wong/Getty Images)
US

WASHINGTON—Secretary of Defense Chuck Hagel outlined a cautious approach to Syria and the Middle East at the Washington Institute for Near East Policy’s annual Soref Symposium May 9. The defense secretary stopped short of further clarifying the U.S.’s positions on Syria’s use of chemical weapons and Iran’s military nuclear program.

The keynote speaker at the symposium, titled Coping with Change: The Middle East and the Second Obama Administration, Hagel said that the “tumultuous landscape presents a new set of security challenges to the United States and its allies.”

“The conflict in Syria is intensifying and becoming more sectarian. … The humanitarian situation is worsening,” he said.

Hagel had recently completed a tour of the Middle East, his first as secretary of defense, visiting Israel (“America’s closest friend and ally in the Middle East”), Jordan, Egypt, Saudi Arabia, and the United Arab Emirates.

He noted that the deterioration in Syria was foremost on everyone’s mind. The fear is that Syria’s stockpiles of chemical weapons and advanced conventional weapons will fall into the wrong hands.

“Syria’s civil war is putting its stockpiles of chemical weapons and advanced conventional weapons at risk, and the escalation of violence threatens to spill across its borders,” he said. Yet, he stopped short of announcing a clear U.S. policy on what the United States plans on doing about it.

Instead, Hagel said the United States was endeavoring to stabilize the region through arming allies and with humanitarian aid and counsel.

“A key element of our efforts to counter Iranian threats is building a cooperative defense network—raising the military capabilities of our partners in the Gulf who share our commitment to regional security and our concerns about Iran and violent extremism on the Arabian Peninsula.”

Hagel singled out Israel as an example of that strategy and said that the United States was committed to ensuring Israel’s “qualitative military edge” against threats from states or terrorists. The U.S. military was in “close cooperation on rocket and missile defense efforts, including Iron Dome, Arrow, and David’s Sling,” he said.

The Defense Department (DOD) would also “release a package of new capabilities, including anti-radiation missiles and more effective radars for its fleet of fighter jets, KC-135 refueling aircraft and the V-22 Osprey, Hagel added.

Hagel was not as explicit on U.S. aid to Egypt as he was with Israel describing the U.S. military’s relationship with Egypt’s military as a stabilizing factor during Egypt’s revolution. The United States is involved in “ensuring the security of Egypt’s borders and Sinai region, maintaining the Camp David Peace Treaty with Israel, and supporting Egypt’s democratic transition.”

No Further Clarity or Warnings

Hagel avoided any mention of potential intervention by American military forces, despite the fact of recently reported chemical weapon use in Syria and Iran’s pursuit in building a nuclear weapon.

The president had made clear that the use of chemical weapons would be a game changer. On Dec. 3, 2012, President Obama said at the National Defense University, “And today, I want to make it absolutely clear to Assad and those under his command: The world is watching. The use of chemical weapons is and would be totally unacceptable. And if you make the tragic mistake of using these weapons, there will be consequences, and you will be held accountable,” according to the White House Blog.

But the red line that the president drew last December has since become a little blurred. Obama said at a news conference on May 9, as reported by “CBS News”:

“There has been the use of chemical weapons inside of Syria, but I don’t make decisions based on ‘perceived’ and I can’t organize international coalitions based on ‘perceived.’” He added, “We tried that in the past, by the way, and it didn’t work out well,” apparently referring to the mistakes in intelligence of Iraq’s alleged weapons of mass destruction that led to the invasion of Iraq. He said what is needed is “hardheaded analysis.”

Hagel’s speech would not go near defining any red lines or at least a warning to President Bashir Assad as the situation in Syria rapidly deteriorates and chemical weapons are used in a limited way. Following his speech, Middle East analysts from the press corps expressed disappointment that Hagel had not seized the opportunity to clearly state the U.S. position on Syria’s use of chemical weapons, and further clarified the U.S. position on Iran’s military nuclear program.

Instead, Hagel placed America’s hope in the long run on democratic transitions.

“The old order in the Middle East is disappearing and what will replace it remains unknown. There will continue to be instability in the region as the process plays out, and we all must adjust accordingly. The best hope for the long-term stability relies on countries like Egypt, Libya, and Syria making transitions to democratic rule,” Hagel said.