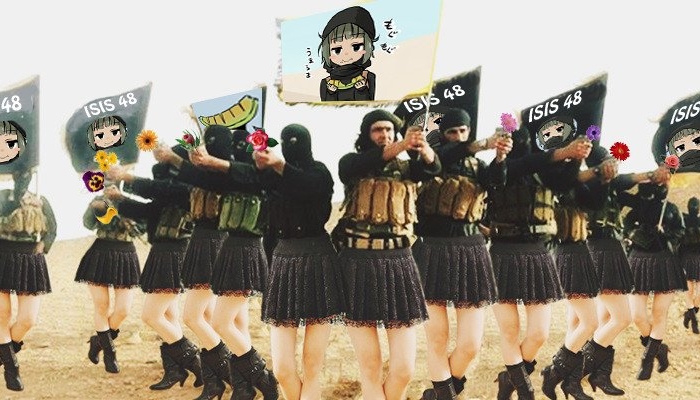 The Internet may soon be awash with images of ISIS fighters wearing dresses, marching as armies of rubber ducks, and posing with goats in compromising positions.

The images are part of an online campaign launched by several hacker groups—including Anonymous, BinarySec, VandaSec, and GhostSec—and officially begins on Dec. 11. They’re encouraging everyone to tease ISIS using the online hashtags “#Daesh” or “#Daeshbags.”

Hackers are joining together under a common cause: to gather photos and online accounts of ISIS and then make fun of them.

“It’s more or less trolling them. However, there will be a few surprises along the way,” said WauchulaGhost, an anti-terrorist hacker, in an interview through Twitter.

“They hate it because it degrades them,” WauchulaGhost said. “All they have is social media, and when you take away that fear and turn it into laughs, they can’t stand it.”

The campaign hinges around the idea that ISIS, like all terrorist groups, is validated by fear. An announcement for the operation says participants will show ISIS “that we are not afraid” and will “mock them for the idiots they are.”

“This one should spread like wildfire, considering the groups involved,” WauchulaGhost said.

Reports of #Daeshbags targeting Anons due to ISIS memes. Make them more mad by joining us on Dec 11 #TrollingDay pic.twitter.com/K604PYTUBb

According to WauchulaGhost, some of the hackers have already hijacked social media accounts of ISIS supporters, and when the operation begins, they will use the active accounts to spread images mocking the group.

They will also promote the name “Daesh.” ISIS has threatened to cut out the tongues of anyone who uses the word, which is an acronym of the Arabic name of ISIS, “al-Dowla al-Islaamiyya fii-il-Iraq wa-ash-Shaam,” yet sounds like the Arabic word “daes” that means something that crushes or tramples.

The word “Daesh” is already used in France and Russia to refer to ISIS, and it replaces the group’s preferred name “Islamic State.” The alternative name assumes that calling ISIS the “Islamic State” validates what they aim to become in their push to build a totalitarian state under the banner of radical Islam.

While the new “#Daesh” campaign may sound like a little more than a joke, the idea behind the campaign is something the U.S. government is also looking into.

The Department of Defense was authorized on Nov. 25 to begin countering ISIS propaganda online. The importance of such operations was outlined by General Joseph L. Votel, commander of Special Operations Command, on March 18.

He also said that while the Department of Defense could play a complementary role in such operations, it would need a civilian lead.

“Islamic State uses social media as a megahorn to spread their hatred and fear. They also use social media to make themselves appear larger than they really are,” WauchulaGhost said.

“Our plan is to lower these standards if you will,” he said. “We will not only ‘Poke Fun’ but will make them look like the Daesh they are.”