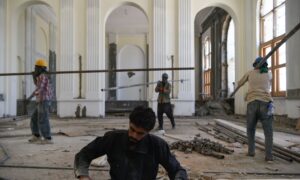 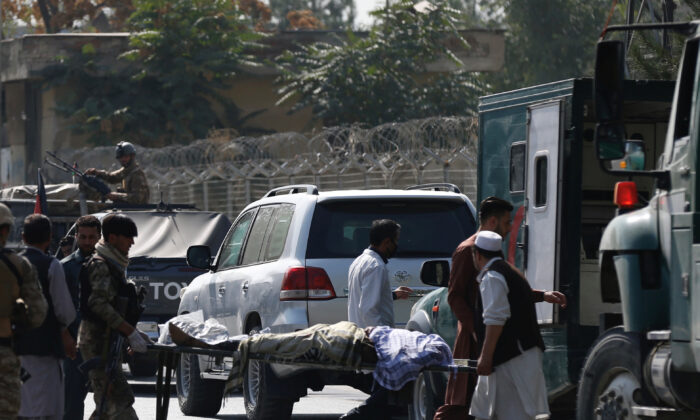 Afghan men carry a victim in a file photo taken after an attack in Afghanistan. (Mohammad Ismail/Reuters)
Middle East

Gunmen stormed the campus of Kabul University in Afghanistan on Nov. 2, killing at least 19 people and wounding 22, Afghan officials confirmed.

“Three attackers were involved. One of them blew up his explosives at the beginning, two were brought down by the security forces,” Interior Ministry spokesman Tariq Arian told the AFP news agency. Authorities said the attack ended after several hours of fighting between the assailants and security forces.

Kabul police spokesman Ferdaws Faramerz told AFP that the majority of those who were killed were students.

While no group has claimed responsibility for the attack, Vice President Amrullah Saleh called the attack an “intelligence failure” and said the Taliban was responsible, CBS News reported.

The Taliban told the news outlet they weren’t involved in the attack; other terrorist groups operate in the country, including ISIS.

“They were shooting at every student they saw,” Fathullah Moradi, a witness, told Reuters, saying he escaped with friends.

Another person posted a photo of the alleged attack on Twitter, writing: “Kabul university students (mainly males) escaping through the walls. What happens to female students? This photo reminds me of the Haqqani attack on American University in 2016 when I & hundreds of other students run for our lives through the walls! what has changed since?”

“This is the second attack on educational institutions in Kabul in 10 days. Afghan children and youth need to feel safe going to school,” he said in a statement, DAWN reported.

Meanwhile, Pakistan’s Foreign Office condemned the “mindless attack” at the university, adding, “This act of terrorism is particularly despicable as it targeted an institution of learning.”

“We extend our deepest sympathies and heartfelt condolences to the families of the victims and wish a speedy recovery to those wounded. Our thoughts and prayers are also with the Afghan people in this hour of grief and sorrow,” it said in the statement.

Mushtaq Rahim, a security specialist who works for the Afghan Affairs Unit, told Qatar-backed Al Jazeera TV that the attack will likely have a negative effect on the U.S.–Taliban talks or a peace deal between the group and the Afghan government.

“This new wave of terror, especially today’s attack, is going to have a negative impact on the peace process,” he said. “People start questioning the whole process even at a time when they [negotiators] are closing in on a potential peace deal.

“Seeing these heinous attacks on civilians and civilian installations creates a negative mood among the public, and the government will also have to take on a harsh approach to manage people’s expectations.”