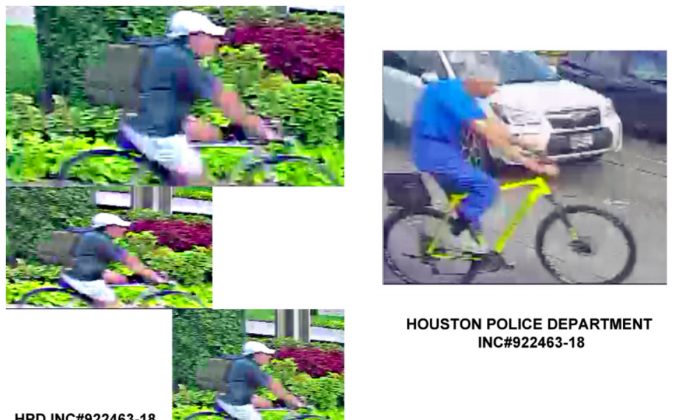 L: The gunman who shot George H.W. Bush’s former doctor was wearing a “fully-loaded” backpack, as seen in a new police surveillance footage. R: Dr. Mark Hausknecht is pictured on the yellow bicycle in the surveillance video. (Houston Police Department)
Crime and Incidents

A man riding a bicycle fatally shot Dr. Mark Hausknecht, 65, twice in the torso on the morning of July 20, authorities said. Hausknecht, a renowned cardiologist, was also on a bike at the time. He was taken down immediately as the gunman fled the scene.

UPDATE #4 New surveillance photo of the suspect wanted in the killing of Dr. Hausknecht. Suspect is now described as wearing a blue, short sleeved polo shirt, (not a gray warm-up suit), a khaki ball cap and khaki shorts. He has a large, fully-loaded, olive green backpack. pic.twitter.com/VRk66CFeXb

Hausknecht was seen by a private ambulance driver who stopped to assist, local media reported, with paramedics applying CPR. Hausknecht was then transported to Ben Taub Hospital where he was pronounced dead.

“The suspect is now described as wearing a blue, short-sleeved polo shirt (not a grey warm-up suit), a khaki ball cap and khaki shorts,” police wrote on Twitter.

“He has a large, fully-loaded, olive green backpack.”

This is surveillance video from a Metro Lift bus traveling southbound on Main. The doctor and suspect are traveling northbound on Main. No other information at this time. Call HPD Homicide or @CrimeStopHOU if you can ID the suspect. All updates will be posted here. pic.twitter.com/eNwbA4zql6

Houston Police said the shooting happened in front of a hotel at 6600 Main Street in Houston. They are still actively looking for the suspect and believe the man to be white or Hispanic and aged around 30 years old.

Crime Stoppers deputy director Nichole Christoph said that fewer than a dozen tips were received, but none were able to help identify a suspect, the Houston Chronicle reported.

“This is a crime that doesn’t make sense,” Houston Police Chief Art Acevedo said July 21, reported the Houston Chronicle. “We don’t even have a motive yet.”

A reward of up to $5,000 is being offered for information that leads to the arrest of the suspect.

Anyone with information is asked to call the department’s Homicide Division at 713-308-3600.