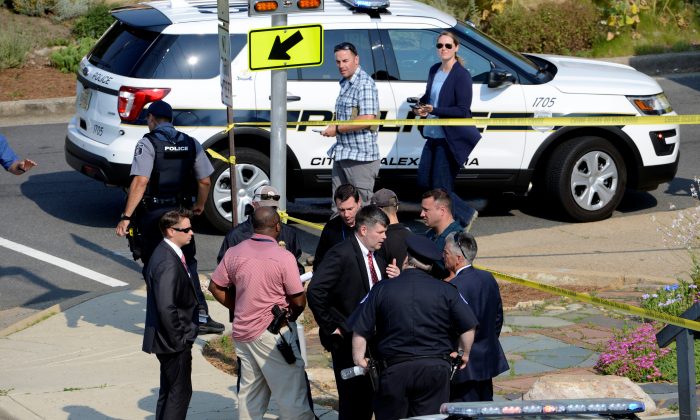 Police and investigators gather at an intersection near the scene where shots were fired during a congressional baseball practice, wounding House Majority Whip Steve Scalise (R-LA), in Alexandria, Virginia on June 14, 2017. (REUTERS/Mike Theiler)
Crime and Incidents

ALEXANDRIA, Va.—A gunman opened fire on Wednesday on Republican U.S. lawmakers who were practicing near Washington for a charity baseball game, wounding senior Republican leader Steve Scalise and several others before being taken into custody, police and witnesses said.

The gunman died later of his injuries, President Donald Trump announced at the White House.

Lawmakers said the shooter, who was armed with a rifle, had exchanged fire with Capitol Hill police who were at the scene and was shot before being taken into custody.

Scalise, No. 3 in the House of Representatives Republican leadership, was shot in the hip at the baseball field in Alexandria, Virginia. He was tended to by fellow lawmakers including Brad Wenstrup, an Ohio congressman who is a physician, before being transported to a hospital.

Trump, a Republican, said Scalise, a Louisiana congressman, was “badly injured” but in stable condition. He said two of the wounded were congressional staffers.

Rep. Steve Scalise of Louisiana, a true friend and patriot, was badly injured but will fully recover. Our thoughts and prayers are with him.

Representative Joe Barton, who was at the scene, told reporters the gunman was a middle-aged man who appeared to be white and was wearing blue jeans and a blue shirt. Representative Mo Brooks of Alabama said the shooter said nothing during the rampage.

The shooting took place at Eugene Simpson Stadium Park in the Del Ray neighborhood of Alexandria, which is across the Potomac River from Washington.

Brooks said 25 to 30 Republican members of the House and Senate had gathered for a practice a day before the annual charity congressional baseball game pitting Republicans against Democrats. The game is scheduled to be played at Nationals Park, home of the Washington Nationals Major League baseball team.

Brooks told CNN that during batting practice he heard a “bam” and he looked over the third base dugout and saw a rifle and heard a quick succession of shots and saw the gunman shooting through the holes in a chain link fence.

When Scalise was shot he went down on the infield between first and second base, then dragged himself into the grassy outfield as the incident unfolded, with a trial of blood following, Brooks said.

Two Capitol police officers who were at the scene to provide security for the lawmakers engaged the gunman with pistols, Brooks said, both suffering wounds.

If it wasn’t for those Capitol Police Officers protecting Rep. Steve Scalise, he might’ve not made it. Thank you officers! #BackTheBlue

My thoughts are with @SteveScalise, staff, & all affected today. Thankful for the bravery and response of Capitol Police that saved lives.

“But for the Capitol police and the heroism they showed, it could very well have been a large-scale massacre. All we would have had would have been baseball bats versus a rifle. Those aren’t good odds,” Brooks said.

The shooting was certain to raise again the contentious issue of gun violence in the United States.

Brooks estimated that there were 50 to 100 shots fired.

“It’s pretty well known in the neighborhood who those folks are on the baseball field,” Brooks said. “It’s not a secret we are practicing … He was going after elected officials.”

Scalise’s position as whip means he has the difficult job of trying to keep order in the fractious party ranks and rounding up votes for bills.

David Miller, who saw the shooting, described a scene in which some players were far enough away from the gunman to run for shelter, while others were pinned down in the middle of the ball field.

“There was absolutely no shelter. They were in the middle of the ball park,” he said. “They can’t run. If they get up they are a target.”

New video shows Steve Scalise on a stretcher moments after being shot during baseball practice in Alexandria, Va. https://t.co/IWK3lMJ8r5 pic.twitter.com/3XZdnnyXvS

Susan Griffiths, spokeswoman for George Washington University Hospital Center, said two people were being treated there and were in critical condition.

Trump, a Republican, said in a statement that he and Vice President Mike Pence were monitoring developments closely.

Democrats were also practicing for this week’s game at another field at a different location, CNN reported.

Wednesday’s incident was the first shooting of a member of the U.S. Congress since January 2011, when Democratic Representative Gabby Giffords was seriously wounded in an assassination attempt at a gathering of her constituents in Tucson, Arizona.

She survived, but six people were killed. Giffords resigned from Congress and became an activist for gun restrictions.

My heart is with my former colleagues, their families & staff, and the US Capitol Police- public servants and heroes today and every day.

“My heart is with my former colleagues, their families & staff, and the US Capitol Police- public servants and heroes today and every day,” she said in a Twitter message.

Member of congress shot: ‘We were sitting ducks’
TOP NEWS