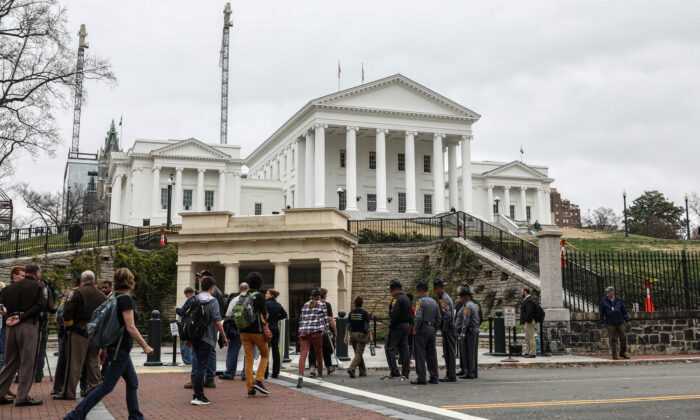 Gun rights advocacy organizations are going to court to put an end to the temporary state of emergency declared by Virginia’s governor ahead of a planned demonstration in the state’s Capitol Square.

The Jan. 15 executive order signed by Gov. Ralph Northam, who is a Democrat, prohibits “all weapons, including firearms, from Capitol grounds” in advance of a Jan. 20 rally for gun rights that is expected to draw “tens of thousands of advocates.”

Law enforcement intelligence analysts, according to Northam’s office, had identified “credible threats of violence surrounding the event,” as well as what they claimed was “white nationalist rhetoric and plans by out-of-state militia groups to attend.”

“There are groups with malicious plans for the rally that is planned for Monday,” Northam told reporters. Every person attending the rally must enter through a security checkpoint, according to officials.

The rally, on what is known as Lobby Day, is being organized by the Virginia Citizens Defense League (VCDL), a nonprofit grassroots organization whose goal is to advance the rights of Virginians to keep and bear arms.

Gun Owners of America (GOA), an organization with more than 2 million members, said that it is joining VCDL in asking the courts “to issue an emergency injunction forbidding the enforcement of the Governor’s unlawful ban.”

“The Lobby Day rally is held annually with thousands of participants and without incident,” Erich Pratt, senior vice president at GOA, told The Epoch Times via email.

“The only difference this year is that, in response to the Democrats’ attempt to eviscerate the Second Amendment, a much larger crowd is expected,” he said.

“If Virginia Gov. Northam sincerely respects the efforts of the NRA and its 5 million members, he can demonstrate that respect by not infringing our rights,” Jason Ouimet, the National Rifle Association’s executive director, said in a statement.

Dave Workman, a senior editor at the Second Amendment Foundation, a nonprofit organization that supports gun rights, told The Epoch Times the actions by the governor aren’t surprising.

Democrats won control of both chambers of Virginia’s state legislature in the November 2019 elections and have vowed to enact legislation they say will help reduce shootings and deaths, and would “break the cycle” of gun violence.

Virginia, especially, has become the center of the gun debate, with 91 of the state’s 95 counties declaring themselves “Second Amendment sanctuaries” or passing some sort of measure affirming their support for Second Amendment rights. A number of other municipalities in the state have also passed similar legislation.

On his official Twitter account, Northam, citing intelligence from law enforcement agencies, said threats of violence surrounding the planned rally include “extremist rhetoric similar to what has been seen before major incidents, such as Charlottesville in 2017.”

The Justice Department announced on Jan. 16 that three men were arrested by the FBI and charged with “firearms and alien-related charges.” They are alleged to be members of a racially motivated, violent extremist group known as “The Base.” The men had reportedly discussed traveling to the Virginia rally, according to The New York Times.

Hundreds of Second Amendment advocates converged on Virginia’s state capital on Jan. 13 to oppose a slew of gun control proposals being voted on by state lawmakers. Four of the measures ended up advancing in the state’s General Assembly after approval by the Senate Judiciary Committee.

The committee passed legislation for universal background checks, a measure allowing localities to ban weapons from some events and government buildings, a “red flag” bill allowing authorities to temporarily confiscate guns from certain individuals deemed a risk, and a law that limits the purchase of handguns to only one per month.

The four bills now advance to the Virginia Senate for further discussion. They would need to be passed by the Senate and the House of Delegates, and be signed by Northam to become law.