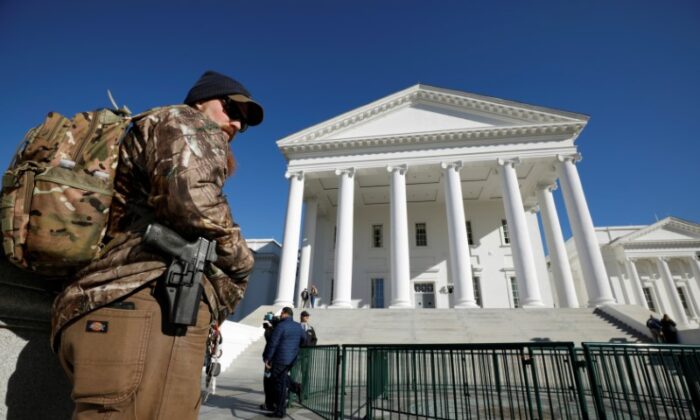 A gun rights activist carries his handgun in a hip holster outside the Virginia State Capitol building as the General Assembly prepares to convene in Richmond, Virginia, on Jan. 8, 2020. (REUTERS/Jonathan Drake)
US News

Gun rights advocacy organizations on Jan. 17 filed an emergency appeal of a judge’s ruling that upheld the Virginia governor’s ban on firearms ahead of a gun rights rally expected to draw thousands of supporters to the state capitol.

A day earlier, The Virginia Citizens Defense League (VCDL) and Gun Owners of America (GOA) issued an injunction against the temporary ban, but Judge Joi Taylor ruled that Gov. Ralph Northam had the authority under state law to take action related to “the safety and welfare” of the state.

Lawyers of the gun rights groups are now turning to the Supreme Court of Virginia.

“Without relief from this court, petitioners and thousands of other rally participants will be irreparably denied their right to bear arms,” the groups’ attorneys argued in their appeal.

The Jan. 15 executive order signed by Gov. Ralph Northam had identified “credible threats of violence surrounding the event,” as well as what the office called “white nationalist rhetoric and plans by out-of-state militia groups to attend.” According to the National Review, the local chapter of extremist group Antifa in Virginia will also attend the rally on Jan. 20.

The emergency declaration lasts from 5 p.m. on Jan. 17 until 5 p.m. on Jan. 21. VCDL is a nonprofit grassroots organization whose goal is to advance the rights of Virginians to keep and bear arms, while GOA has more than 2 million members.

In  Judge Taylor’s written decision, she cited rulings from the U.S. Supreme Court and other courts that found the Second Amendment right to bear arms is not unlimited. Because of that, she wrote, the gun-rights groups would not “suffer an irreparable harm” sufficient to justify the injunction.

Virginia’s governor applauded the ruling in a statement.

“I took this action to protect Virginians from credible threats of violence,” he said. “These threats are real—as evidenced by reports of neo-Nazis arrested this morning after discussing plans to head to Richmond with firearms.”

The Justice Department announced on Jan. 16 that three men were arrested by the FBI and charged with “firearms and alien-related charges.” They are alleged to be members of a racially motivated, violent extremist group known as “The Base.” The men had reportedly discussed traveling to the Virginia rally, according to The New York Times.

Erich Pratt, senior vice president at GOA, told The Epoch Times previously that the rally is held annually, often with thousands of participants.

“The only difference this year is that, in response to the Democrats’ attempt to eviscerate the Second Amendment, a much larger crowd is expected,” he said.

Meanwhile, a package of bills continued to advance in the state’s General Assembly. The bills, which were approved by the Senate Judiciary Committee on Monday, recently passed the full Senate and will now go to the House for consideration. It would have to pass the House and be signed by Northam to become law.

The measures largely passed along partisan lines. The Democrat-led Senate advanced legislation limiting handgun purchases to once a month, requiring universal background checks on gun purchases, and allowing localities to ban guns in public buildings, parks, and other areas.

Democrats won control of both chambers of the state legislature in the November 2019 elections and have vowed to enact stronger gun control policies. They believe stricter legislation will help reduce shootings and deaths and would “break the cycle” of gun violence.

Republicans decried the legislation as an assault on the Second Amendment. They said the bill was aimed at appeasing special interest groups and donors such as Democratic presidential hopeful Michael Bloomberg. GOP senators said the new laws would entrap innocent people and do nothing to stop bad actors.

“This may be what you think is safety, but it is not,” said Republican Sen. Bill Stanley.

One proposed measure (SB-16) that sparked the most controversy—banning the sale and possession of so-called “assault weapons”—was taken off the table at Monday’s hearing.

“SB-16 being stricken from the record is an indication that the governor and some of the Democrats have seen that they’ve overreached and that these bills have unintended consequences,” Daniel Spiker, state director at the National Rifle Association (NRA) told The Epoch Times previously.

“But at the end of the day, it’s still multiple levels of new regulation and new laws imposed on law-abiding citizens,” he said.