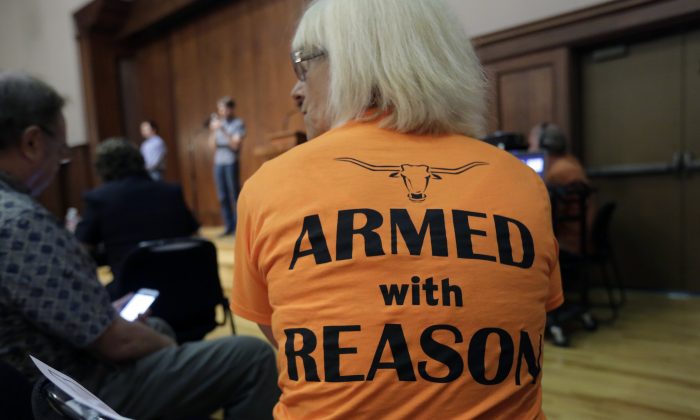 Professor Ann Cvetkovich waits to speak during a public forum at the University of Texas campus as a special committee studies how to implement a new law allowing students with concealed weapons permits to carry firearms into class and other campus buildings, Wednesday, Sept. 30, 2015, in Austin, Texas. The law takes effect in August 2016. (AP Photo/Eric Gay)
US

A pro-gun group is planning on holding a mock mass shooting near the campus of the University of Texas in Austin to protest gun-free zones.

Organizers are calling it the Open Walk and Crisis Performance Event.

The Facebook posting for the event, scheduled for December 12, says that after an open carry walk the group “will return to the UT campus to put on a theatrical performance.”

“This will be an epic event,” the organizers added, noting that they’re still looking for crisis actors to join the event.

“In the wake of yet another gun free zone shooting, Obama is using it to aggressively push his gun confiscation agenda. Now is the time to stand up, take a walk, speak out against the lies and put an end to the gun free killing zones,” the group added.

Murdoch Pizgatti, a founder of the gun rights groups Come and Take It Texas and DontComply.com and one of the organizers, later told the Austin Statesman that it will not hold the event directly on campus after the university said it would be considered criminal trespass.

Matthew Short, a spokesman for the gun rights groups, added that the event will include fake blood, gun noises blared from bullhorns, and cardboard weapons.

“Criminals that want to do evil things and commit murder go places where people are not going to be able to stop them,” Short said. “When seconds count, the cops are minutes away.”

Count history professor Joan Beuberger, who helps lead the group Gun Free UT, as among those opposed to the staged event.

“Staging a mass shooting during an anxious time for students — finals week — not only breaks rules but shows real disrespect for the feelings of students, faculty and staff who don’t want to have guns around them in the first place, but will be forced to put up with guns in public places in 2016,” Neuberger said.

Currently, guns are allowed on limited areas of campus but a new law that is set to go into effect in August 2016 will expand on all public universities in the state where concealed carry permit holders can carry weapons.

One of the countries’ deadliest mass shootings took place on the University of Texas campus in 1966, leaving 16 dead and more than 30 others wounded.

Another shooting took place in 2010.