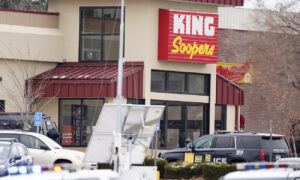 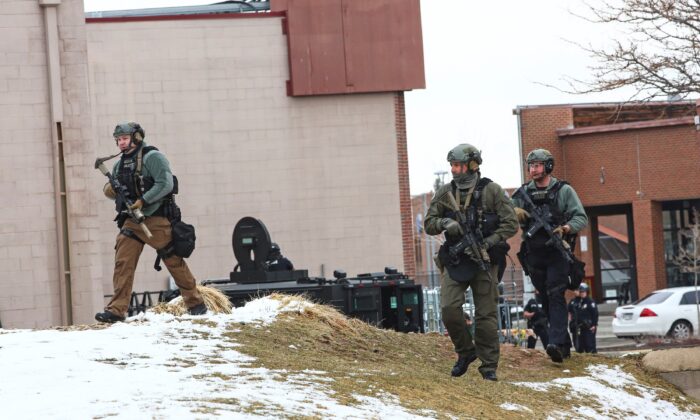 Law enforcement officers sweep the area outside of a King Soopers grocery store, which was the site of a shooting in Boulder, Colo., on March 22, 2021. (Kevin Mohatt/Reuters)
Crime and Incidents

The suspect in a mass shooting at the King Soopers supermarket in Colorado purchased a semi-automatic rifle just days before carrying out the attack, according to court filings.

The location of the purchase wasn’t detailed.

Ruger introduced the semi-automatic firearm in 2014, describing it as a M4-style modern sporting rifle.

The romantic partner of Alissa’s oldest brother told officers that she had seen Alissa playing with a gun she thought looked like a “machine gun” about two days ago.

Alissa was discussing having a bullet stuck in the gun and was playing with the firearm, which made two others in the house, whose names were redacted, upset. They took the gun, the partner said.

Police officers were dispatched to a King Soopers grocery store in Boulder at approximately 2:40 p.m. on Monday after calls of a man with a gun.

Witnesses described the man as possessing a black AR-15 and killing an elderly man in the grocery store’s parking lot before entering the store and firing shots.

Multiple callers were hiding in the store as the mass shooting unfolded.

“It was aired over the radio that the suspect put his gear down inside the King Soopers,” Cantu wrote in the affidavit. “A photograph of the items that the male removed on scene included a green tactical vest, a rifle (possible AR-15), a semiautomatic handgun, a pair of jeans, and a dark colored long sleeved-shirt. There was much blood around the items.”

Officers later found a green rifle case in the front passenger compartment of a black Mercedes C sedan, which was in the parking lot next to King Soopers and registered to a man believed to be a brother of the suspect.

Alissa is facing 10 counts of first degree murder. He was treated at a hospital for injuries before being transferred to the Boulder County Jail at approximately 12:49 p.m. on Tuesday.

Alissa was charged for third-degree assault in Arvada, about 20 miles southeast of Boulder, in 2018.

David Snelling, an Arvada detective, told The Epoch Times via email that the Arvada Police Department has two criminal reports in reference to Allisa, one for a third-degree assault in 2017 and another for criminal mischief in 2018.

The FBI is assisting authorities in the probe into the shooting.

Officials told reporters during a press conference Tuesday that the investigation is in its early stages, and declined to share any of what Alissa has told them.