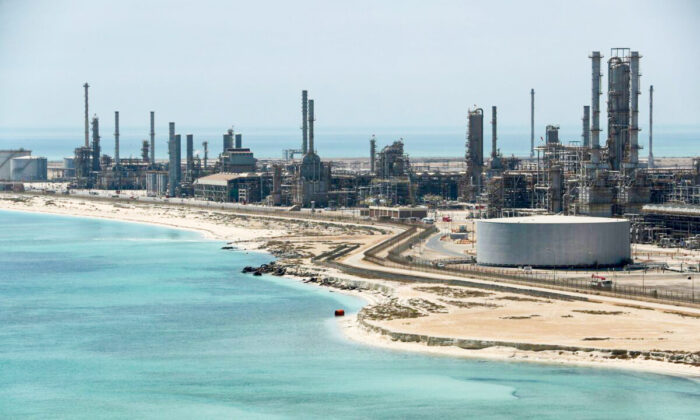 Saudi Arabia and the United Arab Emirates warned on May 10, that their spare energy capacity is decreasing in all energy sectors as key producers reduce investment in fossil fuels, pushing oil,  diesel, and natural gas to trade at near-record highs.

Brent oil was trading at around $102 a barrel as of the afternoon of May 10.

“I am a dinosaur, but I have never seen these things,” said Saudi energy minister Prince Abdulaziz bin Salman to Bloomberg on May 10, at an OPEC conference in Abu Dhabi.

The prince was referring to the surge in prices for refined oil products, in particular in the United States, where gas and diesel prices are hitting a record high, causing problems for the Biden administration.

“The world needs to wake up to an existing reality. The world is running out of energy capacity at all levels,” said the Saudi minister.

Suhail al Mazrouei, the UAE’s energy minister, said to Bloomberg at the same conference, that without additional global investment, OPEC+ would not be able to guarantee sufficient supplies of oil for its customers as the world economy fully recovers from the pandemic.

Of the major producers, Saudi Arabia and the UAE are among the few producers investing in greater output and together, are spending billions of dollars to boost crude capacity by 2 million barrels a day by the end of this decade.

The other producers are struggling with investments, as Western shareholders and governments push for a transition from fossil fuels to “green” energy.

OPEC+ announced a 432,000 barrel-a-day increase for June at its meeting on May 5, but it’s struggling to reach even that monthly target, as many members are producing below their quotas.

The 23-nation energy alliance fell short of its production quotas by 2.59 million barrels per day in April, according to the latest OPEC+ survey by S&P Global Commodity Insights.

The UAE minister still believes that there is no serious market crisis at the moment and that OPEC has little urgency to boost oil production.

However, several key importers disagree, especially the EU, U.S., and Japan, which have been demanding a more rapid increase in output from OPEC+ since last year.

The same nations have at the same time imposed sanctions on Russia a lead OPEC member, after its invasion of Ukraine at the end of February.

The EU has recently announced an even more punitive ban on Russian energy imports this month.

Crude prices have risen more than 35 percent this year to a high of around $105 a barrel since sanctions were placed on Moscow over Ukraine.

The G7 nations have lobbied OPEC+ to punish Russia, but the Saudis and the UAE reiterated that the cartel would not allow geopolitics to affect its decisions.

Al Mazrouei blamed the politicization of the oil market for the latest rise in prices and declared that OPEC+ was unified and that all members have pledged not to hike output on there own.

“We are together,” he said. “Trust me. No one can unilaterally increase production unless they’re intending to break the alliance,” said the UAE minister.

“We are getting a fraction of what the companies and governments are making from those extra taxes,” he said.

The minister said that it was wrong to blame crude oil producers and that high taxes in consuming nations were to blame for skyrocketing fuel prices.

He also told CNBC that the revival of a proposed bill in Washington could push oil prices by as much as 300 percent.

Top OPEC ministers have hit back at new U.S. legislation intended to regulate oil output and that OPEC was being unfairly targeted over the energy crisis, saying that such efforts would bring chaos to energy markets.

A U.S. Senate Committee greenlighted the new bipartisan No Oil Producing and Exporting Cartels (NOPEC) bill on May 5 with a 17-4 majority, the first step towards passage of the decades-old proposal.

It now needs to be passed by the full Senate and the House, before being signed into law by the president.

The proposed bill aims to protect U.S. consumers and businesses over the manipulation of energy prices and would allow the U.S. government to open an antitrust suit against OPEC over its control of the majority of the world’s oil supply and prices.

“If you hinder that system, you need to watch what you’re asking for, because having a chaotic market you would see … a 200 percent or 300 percent increase in the prices that the world cannot handle,” said Al Mazrouei to CNBC at the World Utilities Congress in Abu Dhabi.

“We, OPEC+, cannot compensate for the whole 100 percent of the world requirement,” he said.

“How much we produce, that is our share. And, actually, I would bet that we are doing much more.”

The UAE and Saudi energy ministers issued a joint statement, saying that both OPEC and non-OPEC members should work together to handle the ongoing energy crisis.

“I’m very concerned about the holistic energy system existing today,” said Prince bin Salman, who added that “the world needs to work collectively, responsibly, comprehensively in providing us and salvaging the world economy.”