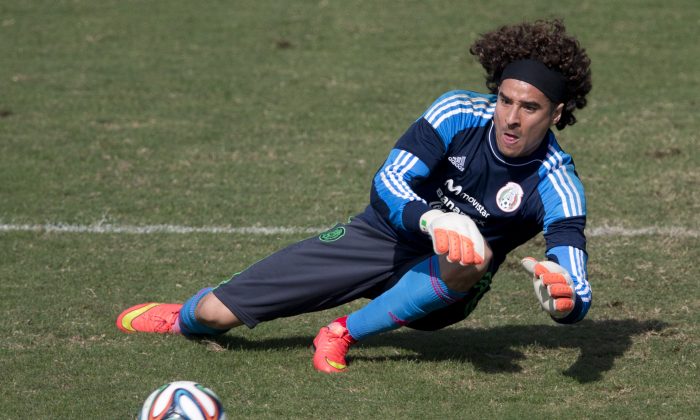 Mexico goalkeeper Guillermo Ochoa leaps to trap a ball during a training session in Santos, Brazil, Thursday, June 26, 2014. Mexico will face the Netherlands in their next World Cup match in Fortaleza, Sunday. (AP Photo/Eduardo Verdugo)
Soccer

Where is Guillermo Ochoa headed?

The 28-year-old Mexican international is currently out of contract. Previously, he was with French Ligue 1 side Ajaccio on a three-year contract.

After a stand out performance at World Cup 2014, Ochoa became the most sought after free transfer.

Ochoa, however, insisted that he will take his time to make a decision on where to go.

“I have received several proposals,” said Ochoa when asked about where he will be playing football after the World Cup.

“They are from French teams and others from Europe.

“But it’s still not the moment to decide. I am going to analyze everything and take my time.

“So, I am going to enjoy this spare time and, in two weeks, when I have taken a decision, I will let the press know.”

It has been almost two weeks since Ochoa made his statement, and there has been no word from the player or his agent, Christophe Monga.

“His priority is to stay in Ligue 1,” Monga said earlier.

“He was approached by two French clubs, but we rejected the offers because it was not the challenge he was expecting.

“His priority is to stay in France but, if there are no offers, we’ll see what happens in the European market,” added Monga.

So far, Ochoa has been linked with Liverpool, Arsenal, and Malaga.