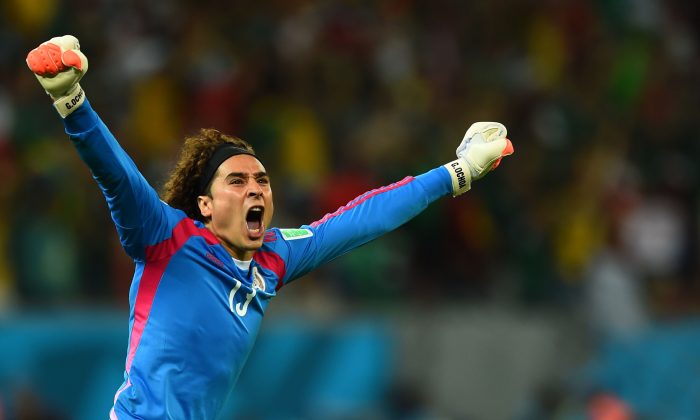 Guillermo Ochoa of Mexico celebrates his team's first goal during the 2014 FIFA World Cup Brazil Group A match between Croatia and Mexico at Arena Pernambuco on June 23, 2014 in Recife, Brazil. (Photo by Jamie McDonald/Getty Images)
Soccer

Mexico’s number one goalkeeper Guillermo Ochoa is reportedly being sought after by Arsenal, Atletico Madrid, and Barcelona.

The 28-year-old goalie’s stock has been rising after his top notch performances in the World Cup 2014 group stage matches.

Ochoa famously held Brazil to a 0-0 draw, kept a clean sheet against Cameroon, and only let a goal past him against Croatia.

Now, Atletico Madrid and Arsenal are supposedly keen on signing the shot-stopper, who is a free agent after his contract with France side Ajaccio ran out.

Spanish newspaper Mundo Deportivo claims that Atletico Madrid is looking to sign Ochoa as a replacement for their goalkeeping stalwart Thibaut Courtois. Although he spent three seasons on loan from Chelsea with Atletico, Blues boss Jose Mourinho wants the highly-rated ‘keeper back at Stamford Bridge next season.

Atletico are also eyeing Costa Rica and Levante keeper Keylor Navas and Benfica’s Jan Oblak as back up in case Ochoa doesn’t wish to join them.

Arsenal manager Arsene Wenger is also looking to sign Ochoa, but with the intent that the Mexican will provide competition for first-choice goalie Wojciech Szczesny, according to the Daily Star.

He said: “I have spoken with Barcelona, yes, in the same way that I have done with 20 other teams.”

“I spoke about the possibility of Memo, I offered him to Barcelona, that is true.”

Ochoa is unfazzled by the attention, and prefers to let his agent carry on handling his transfer matters.

He said: “I am not worried about what is being said about where I could continue my career, my agent takes care of those things.”

“I am staying calm, as there are options and there is a lot of time for analyzing which is the best.”