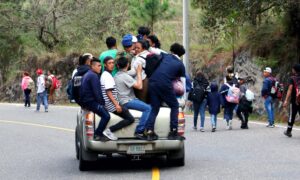 More Than 2,000 in Migrant Caravan Enter Guatemala With US in Their Sights
0
Share Now
FacebookTweetParlerEmail
Copy Link 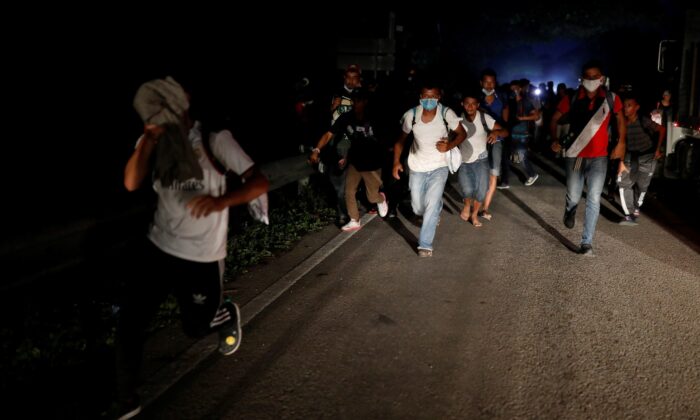 GUATEMALA CITY—Guatemalan authorities sent more than 3,000 Honduran migrants back to their home country over the past few days, they said on Saturday, dissolving much of a caravan heading north even while dwindling groups continued the trek toward the United States.

Thousands of caravan members had crossed into Guatemala from Honduras without authorization last Thursday, pushing past troops at the border as they sought to escape poverty exacerbated by the coronavirus pandemic.

As many as 2,800 people crossed the border in the initial incident, according to Guatemala’s government.

Since then and on Saturday, 3,586 migrants had “opted to return,” the government said.

Still, some appeared to press on toward Mexico. By Saturday evening, some 150 migrants were at a shelter in Tecun Uman, close to the Mexico border, while about 200 migrants were on the road in the Izabal region, between Honduras and Peten, Guatemalan migration authorities said.

Vice Minister of Foreign Relations Eduardo Hernandez called on the government of neighboring Honduras to step up efforts to stop the flow of migrants headed to the United States, calling the caravan a health risk amid the pandemic.

Honduras has not “assumed the responsibility to take preventative actions to avoid the problem,” Hernandez said in a statement.

Honduras’ Vice Foreign Minister Nelly Jerez said the government was working to prevent people from migrating illegally, including efforts to improve the economy and security.

On Saturday morning, the Honduran migration institute said it had registered 533 people who returned after setting out for Guatemala.

Mexican President Andres Manuel Lopez Obrador, who has taken steps to curb illegal immigration to avoid clashing with his U.S. counterpart, Donald Trump, has suggested that the caravan’s departure from Honduras had been timed to coincide with the U.S. election.

Mexican migration authorities have warned that any migrants who were to knowingly put others at risk of infection could face jail.

Trump insulted and threatened Mexico repeatedly in his 2015-16 election campaign and has made cracking down on illegal immigration a priority during his presidency.