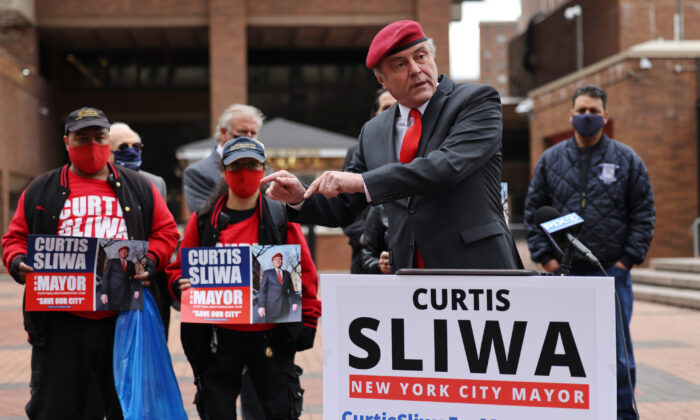 Sliwa received 68.9 percent of the Republican votes to 26.9 percent for Mateo, with over 96 percent of precincts reporting, according to preliminary results from the Board of Elections.

“Ladies and gentlemen, we have just won the Republican Party in an overwhelming way,” Sliwa said Tuesday at the Empire Steakhouse in Midtown, according to the New York Post.

“It was a long period of time that took going door-to-door, street by street, subway station by subway station, and spreading the word,” he said, according to the outlet.

With public attention on crime and safety, both Republican candidates campaigned on a law-and-order platform, with Sliwa resorting to some colorful stunts as he sought to capitalize on his history with the Guardian Angels, a group of volunteer crime fighters.

Sliwa made headlines in May when he embarked on a 24-hours-straight subway ride after challenging Democrats to join him on the journey, part of his bid to draw attention to his tough-on-crime policy posture.

“Hey, Democrats! Wanna be mayor? Gotta ride the subway,” Sliwa said at the time in a video on Twitter, in which he held up a pair of hockey masks and said, “I know some of you are afraid of getting slashed—I brought masks for you to protect you from getting slashed.”

Sliwa told The Epoch Times after he completed the challenge that no Democrats joined him to ride New York City’s number 4 train, which he dubbed the “Slasher’s Express” after two attackers punched, slashed, and robbed multiple victims on the train a week prior.

On the Democrat side, Brooklyn Borough President Eric Adams appeared to take the lead in the mayoral primary, but it could be weeks before it becomes clear who is actually on top in the first citywide election to use ranked choice voting. Ranked choice voting wasn’t a factor in Sliwa’s case because there were only two candidates in the race.

Speaking to jubilant supporters on Tuesday night, Adams acknowledged that he hadn’t won yet, and that under the ranked choice system there were multiple rounds of ballot counting still to go.

“We know that there’s going to be twos and threes and fours,” he said. “But there’s something else we know. We know that New York City said, ‘Our first choice is Eric Adams.’”

Sliwa will face whoever ultimately emerges victorious from the Democrat primary in the November general election. He is widely viewed as the underdog, with registered Democrats outnumbering Republicans by seven to one in New York City.