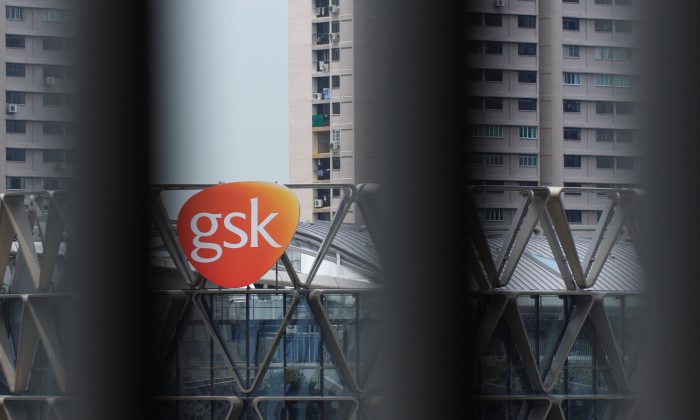 The GlaxoSmithKline (GSK) logo on top of GSK Asia House is seen through vertical louvres in Singapore, on March 21, 2018. (Loriene Perera/Reutes)
Companies

GSK has lagged rivals in recent years in producing multibillion-dollar blockbusters and it largely sat out a spate of dealmaking by rival drugmakers under previous CEO Andrew Witty. That is a situation Walmsley wants to change.

Britain’s biggest drugmaker is paying $75 a share for Tesaro, an 110 percent premium to the 30-day average price. It is also taking on Tesaro’s debt.

News of the lofty valuation and the fact that buying Tesaro will take years to pay off sent GSK shares down 8 percent on Dec. 3 their biggest daily fall in 10 years.

Boston-based Tesaro has long been seen as a potential takeover target, with other suggested acquirers in the past including Switzerland’s Roche.

The definitive agreement to acquire Tesaro, which means GSK has to pay $162.5 million if the tie-up is terminated, comes on the same day as GSK sold its India-focused Horlicks nutrition business to Unilever for $3.8 billion, freeing up cash.

PARP inhibitors work by blocking enzymes involved in repairing damaged DNA, thereby helping to kill cancer cells, and they are a growing focus for drug research, with potential for use beyond ovarian tumors in breast, lung, and prostate cancers.

For GSK, making Zejula work in wider population groups will be critical in justifying the high price it is paying.

Walmsley, who took over in April 2017, has made replenishing GSK’s medicines cabinet her top priority. She recently hired a business development executive from Roche’s Genentech, another signal of her readiness to make acquisitions.

“This is an example of us executing on what we said we were going to do … to bring growth, pipeline, commercial capability, and near-term catalysts,” she told reporters.

“We still will be open to other potential bolt-ons in business development,” Walmsley added.

GSK said buying Tesaro would weigh on adjusted earnings for the first two years by mid to high single digit percentage rates, but the acquisition should be accretive by 2022. The deal is expected to complete in the first quarter of 2019.

The company’s dividend policy will not be affected by the deal and GSK still expects to pay 80 pence a share in 2018.

Zejula’s revenues in its current approved indication as second-line maintenance treatment for ovarian cancer were $166 million in the nine months to September.

Industry analysts, on average, expect annual Zejula sales to reach $1 billion by 2023, according to Refinitiv data.

In addition to Zejula, Tesaro also has several oncology medicines in development, including a number of experimental immunotherapy treatments.

That dovetails with GSK’s other work in cancer, a field where it has had a patchy track record in the past.

Three years ago, GSK sold its established cancer medicines to Novartis. But it retained some early-stage projects that it now believes have the potential to leapfrog rivals and be at the forefront of treatment.

They include an antibody drug for multiple myeloma, which could be launched in 2020, as well as new kinds of cell therapies designed to modify patients’ immune cells.

Tesaro shares, which have run up in recent weeks on takeover speculation, jumped 60 percent to nearly $74 in early trade on Nasdaq, while Clovis also gained 15 percent.

Tesaro was advised by Citi and Centerview Partners, while PJT Partners and BoA Merrill Lynch worked for GSK.