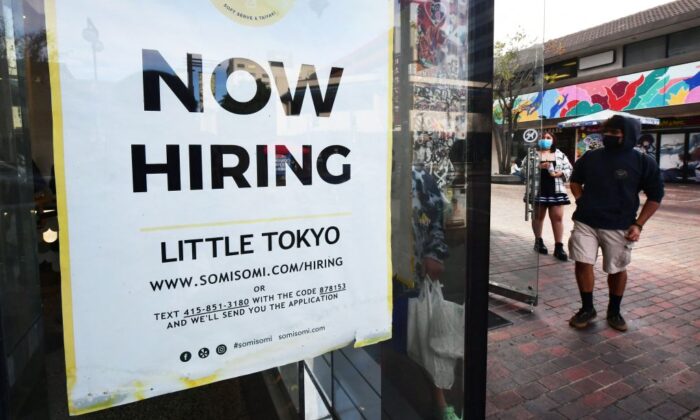 A "now hiring" sign is posted in the window of an ice cream shop in Los Angeles, Calif. on Jan. 28, 2022. (Frederic Brown/AFP via Getty Images)
Economy

A growing number of workers are having their job offers rescinded by companies as fears over a recession amount, and many look to cut down on hiring, according to reports.

According to LinkedIn, a growing number of its members have reported having their offers to join new employers revoked in recent weeks, including one Columbia Business School graduate who had been accepted as a product manager at Twitter.

Coinbase is also among those companies that have made a U-turn on job offers, with the cryptocurrency exchange platform announcing earlier this month that it will be freezing hiring for the “foreseeable future.”

The digital currency platform said it will also be pulling some accepted job offers.

“After assessing our business priorities, current headcount, and open roles, we have decided to pause hiring for as long as this macro environment requires,” the company said in a blog post. “While we did not make this decision lightly, it is the prudent one given market conditions,” it added.

Other major companies including Twitter, Meta, Netflix, Uber, Salesforce, Snap, Paypal, Getir, Tesla, and real-estate brokerage Redfin Corp. have also cut down on hiring or have laid off workers in recent months amid rising inflation and a volatile economy.

More than 15,000 tech workers were laid off globally in May, according to a TechCrunch analysis.

Tesla CEO Elon Musk, who this week admitted the company’s plants in Texas and Berlin are “losing billions of dollars” expressed concerns over America’s economy and said the electric vehicle maker would need to slash 10 percent of its salaried workforce.

The U-turns come despite the labor market remaining strong, with an unemployment rate at 3.6 percent in May, according to official data (pdf).

However, inflation levels remain at a 40-year-high which will likely leave employers feeling cautious when it comes to expanding workers as budgets are tightened and costs soar.

“A lot of companies were over-hiring, part of this is really a correction on that,” Lars Schmidt, founder of HR search firm Amplify, told Axios earlier this month.

In contrast, small businesses appear to be struggling with ongoing labor shortages, with a June survey of over 825 small businesses conducted by Vistage Worldwide Inc. for the Wall Street Journal, showing that 63 percent of owners said that hiring challenges were affecting their ability to operate at full capacity.

A June 6 article by ADP Research Institute also found that the number of small businesses that said hiring was a top challenge had drastically increased in the last three months, with 55 percent reporting hiring as a challenge in April, up from 39 percent in January.

Sid Upadhyay, co-founder and CEO of the recruiting company WizeHire, told CNBC that the uptick in companies deciding to revoke job offers is “highly unusual.”

“The broader economic environment has shifted so much: Tech companies were incentivized to grow at all costs, and in a matter of weeks, we’ve moved into a world where we’re focused on resiliency.”

However, Upadhyay noted that such rescinded offers are only being seen in a small number of cases, adding that there are “still hundreds of thousands of new jobs in the market, and most organizations extending offers are resilient and profitable companies.”